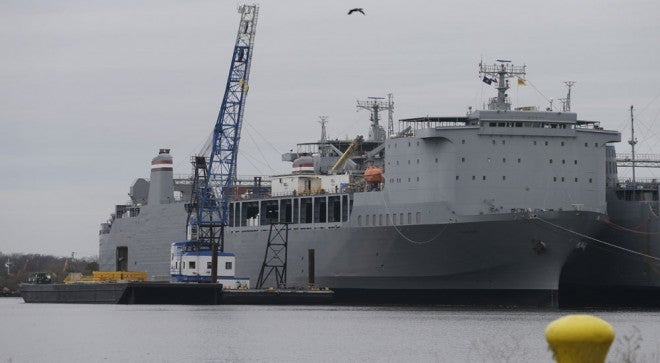 A barge is anchored alongside the MV Cape Ray in Portsmouth, Va., Thursday, Jan. 2, 2014. The ship houses two of the systems that are capable of neutralizing lethal chemical weapons such as nerve gas with water and bleaching compounds. AP

ABOARD THE MV CAPE RAY – With special machinery installed in the hold of this American cargo ship, the MV Cape Ray is poised to embark on an unprecedented mission to destroy Syria’s lethal chemical agents at sea.

At a shipyard in Virginia, the 650-foot (197.5-meter) ship from the Maritime Administration’s reserve fleet has been outfitted with two portable hydrolysis systems designed to neutralize the most dangerous chemicals in Syria’s arsenal.

The US officer told reporters he expects to get the green light to set off “within about two weeks.”

Under a deal brokered by Russia and the United States, Syria was supposed to remove its key chemical weapons components by the end of 2013.

But the country’s raging civil war, logistical problems and bad weather have held up plans to move chemical agents out of Syria to the port of Latakia, according to the joint UN-Organisation for the Prohibition of Chemical Weapons (OPCW) mission overseeing the effort.

The most dangerous elements used for mustard gas and the nerve agent sarin are supposed to be loaded soon onto cargo ships and escorted to Italy by Danish and Norwegian naval vessels.

In waters off Italy, about 700 tonnes of chemical agents will then be loaded onto the Cape Ray, according to Frank Kendall, Pentagon undersecretary of defense for acquisition, technology and logistics.

The US ship will then head out to an undisclosed location, possibly in the Mediterranean, to begin the task of neutralizing the chemical agents.

Inside the cavernous vessel, all is ready to accommodate a 35-member crew and 63 specialists overseeing the hydrolysis operation, as well as a security team.

The hold of the ship resembles a mostly empty warehouse with a giant white tent housing a filtration system.

Inside the plastic tent are two storage tanks, each containing a cistern where the lethal agents will be mixed with water and other chemicals.

While destroying chemical weapons at sea is without precedent, the technology employed has been around for decades, according to Adam Baker, a chemical engineer with the US military’s Edgewood Chemical Biological Center.

“It is essentially the same chemical process that we’ve used for our chemical weapons stockpile,” Baker said. “We just scaled it down into a transportable form.”

The hydrolysis process is supposed to render the lethal agents into a sludge similar to industrial toxic waste.

On the outside of the tent, huge green pipes run through a forest of valves and six enormous gray cisterns, where the resulting material from the hydrolysis will be stored and measured for toxicity.

The “residue” from the operation, which will amount to 1.5 million gallons (5.7 million liters), will then be transferred to white cisterns mounted on a lower deck.

Private firms will handle the disposal of the hazardous material, and the OPCW has launched an appeal for offers from contractors. Some 42 firms have already expressed an interest.

French human rights and environmentalist group Robin de Bois has warned the extraordinary plan carries numerous risks as the 36-year-old ship has only a single hull and no transverse partitions in case the ship suffers a leak or a fire.

But the ship’s captain said the double hulls are used for oil tankers or other cargo vessels. In this case, the chemicals are already confined in hermetically sealed containers.

“Safety is our first order of business,” said Kendall.

“And we’re going to make sure that we dispose of the materials that we have to handle in a very safe manner and we take care of both the people that are involved, people that might be affected, and the environment.”

The neutralization work at sea is due to take about 45 to 90 days, according to the Pentagon.

Much will depend on the weather and conditions at sea.

The ship is designed to absorb rough seas but “if it becomes unmanageable, we’ll have to shut down production,” Jordan said.

Read Next
2 nabbed, P1.6M in ‘shabu’ seized
EDITORS' PICK
DOH: 28,471 new COVID-19 cases in PH; active cases now 284,458
On Day 2 of implementation, gov’t says workers now exempt from ‘no vax, no ride’ policy
Over 3 Million worth of prizes to be won at Smart Padala’s SENDali Manalo Promo!
Acer starts the year off strong with the Aspire Vero National Geographic Edition
Metro Manila posts lowest temperature yet this ‘amihan’ season at 19°C
Gear up and get ready to play with Yamaha Mio Gear
MOST READ
Derek Ramsay on being married to Ellen Adarna: ‘Gumaan ‘yung mundo ko’
Emma Stone calls Andrew Garfield a ‘jerk’ after he ‘lied’ about his ‘Spider-Man: No Way Home’ appearance
Lucky plants to grow in 2022
Retirements prompting major reshuffle in PH military
Don't miss out on the latest news and information.