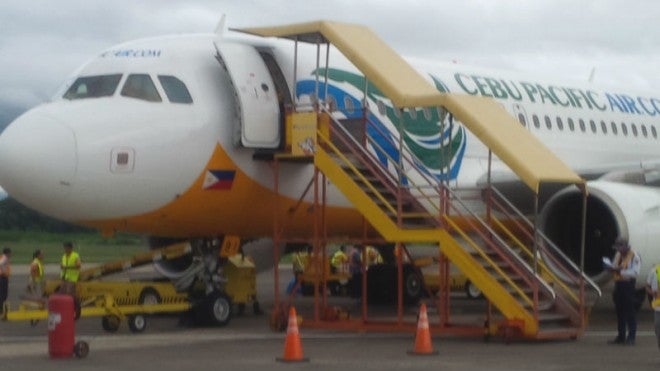 A Cebu Pacific plane on the tarmac of the Puerto Princesa international airport. The Civil Aviation Authority of the Philippines said Tuesday passengers will be allowed to use, subject to certain conditions and limitations, electronic gadgets such as cell phones, laptop computers and MP3 players, while aboard commercial planes within Philippine territory. PHOTO BY RICK ALBERTO

MANILA Philippines—The Civil Aviation Authority of the Philippines said Tuesday passengers will be allowed to use, subject to certain conditions and limitations, electronic gadgets such as cell phones, laptop computers and MP3 players, while aboard commercial planes within Philippine territory.

Memorandum Circular No. 52-13, which was signed by CAAP Director-General William Hotchkiss III last Nov. 28 and which will take effect on Wednesday after publication, allows  the conditional use of transmitting portable electronic devices (TPEDs), music players and global system for mobile communication on board aircraft (GSMOBA) devices on all commercial aircraft operating within Philippine territory.

The memo covers the use of TPEDs such as laptops and cellular phones, utilizing the Internet, short-message-service (SMS), voice communications and other broadband services during flights.

The CAAP said that when the aircraft doors are still open, passengers are free to use their laptops and cell phones and activate their Internet, short-message-service (SMS), voice communications capabilities unless the pilot-in-command and or senior cabin crew member prohibit the passengers from doing so via the aircraft’s public address system.

Laptops using broadband communications and cellular phones may not be allowed or used while the aircraft is refueling. All transmitting portable electronic devices must be turned off.

When the aircraft doors are closed, the TPEDs must be put on silent mode and may be used only for short-message-service (SMS) or Internet. Voice communications are not allowed except the use of GSMOBA provided its use does not interfere with the orderly conduct of flight.

Games on electronic devices on silent mode may be played.

The use of MP3 players should always be with earphones and not with additional or separate speakers and/or amplifiers.

Republic Act No. 9497, or the Civil Aviation Authority Act of 2008, authorizes the CAAP director-general to come up with rules to implement or interpret provisions of the Philippine Civil Aviation Regulations that were crafted by the CAAP board chaired by the transportation secretary.

Hotchkiss required all Philippine registered commercial airlines and operators to submit for CAAP approval their copies of their revised operations manual reflecting the changes stated in the memo.

The CAAP said outbound passengers on foreign commercial aircraft may be subjected to different rules on the use of electronic gadgets.  Aviation regulators in Canada, the United States and the European Union, which have earlier allowed this year the conditional use of TPEDs on aircraft, had come up with their own rules.

The guidelines issued by the foreign regulatory bodies contain detailed provisions on the use of other types of devices such as smartphones, e-readers and tablets; connection modes such as blue tooth, 3G, 4G and WiFi; and rules on putting gadgets on non-transmitting mode or “flight mode”—all of which are not mentioned specifically in the CAAP memo.

The use of electronic devices such as cell phones and laptops were earlier banned on board aircraft due to fears that such gadgets emit electromagnetic signals that might interfere with the plane’s electronic systems.—With Celest Flores, INQUIRER.net