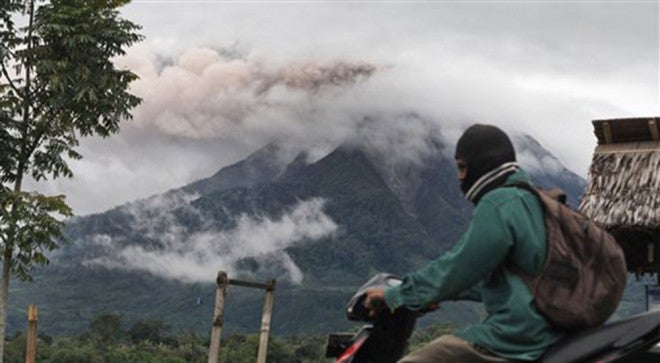 Mount Sinabung spews volcanic ash as seen from Tiga Pancur, North Sumatra, Indonesia, Friday, Dec. 6, 2013. About 15,000 people have been evacuated from 17 villages on the slope of Mount Sinabung after authorities raised the alert status of the rumbling volcano to the highest level on Nov. 24. AP

KARO, Indonesia—Authorities say a volcano in western Indonesia that has been spewing lava and clouds of gas high into the sky has let out a new burst, triggering panic.

Nugroho says about 19,000 villagers have been evacuated from a danger zone 5 kilometers (3 miles) around the crater.

The 2,600-meter (8,530-foot) volcano has sporadically erupted since September. An eruption in 2010 caught scientists off guard because it had been quiet for four centuries.