2 vendors killed after being hit by falling brick frame 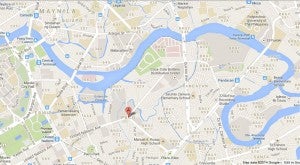 MANILA, Philippines–Two street vendors were killed after a brick frame fell from the fifth floor of a building in Paco, Manila, on Tuesday morning.

Delia Babon, a 47-year-old vegetable vendor and Simplicia Sister, a seller of children’s clothes both sustained head injuries when part of a commercial and residential building along Paz Street just in front of Paco Church collapsed above them.

According to fellow vendor Leonora Lam-ang, the accident which took place at around 8:30 a.m. happened very quickly.

“Most of the vendors near the building immediately scampered after the crash so we did not notice that there were casualties,” Lam-ang, whose stall of horns was just a few meters away from the structure, told the Inquirer.

It was only a few minutes after the accident when the people saw the bloodied bodies of Babon and Sister on the pavement where the debris blocks fell, said Lam-ang.

The vendor also said that Babon died on the spot while Sister was still breathing when some residents tried to help the two.

Sister, 58, was rushed to Ospital ng Maynila but was declared dead on arrival by Dr. Sheena Feliciano. The doctor said the victim succumbed to her head injuries.

Babon, whose body was still on the pavement when the Inquirer arrived at the location, sustained a crack on her head when a big block of debris hit her, scene of the crime investigators said.

Her husband, Adan, told the Inquirer that she was about to buy breakfast at a fast food joint renting the first and second floor of the building when the accident happened.

“We just came from our stall along Pedro Gil when she decided to buy breakfast from the fast food chain,” said the victim’s husband who added that he was also buying food at a nearby store when part of the building collapsed.

Sister’s daughter Jos Ann said that her mother went ahead of her three children to their stall situated beside the building.

“We were supposed to go there with her but she decided to prepare the goods early,” Jos Ann told the Inquirer.

The victim’s daughter claimed that had they gone to the stall early, they would also have been killed or injured.

Police investigators are still trying to reach the owner of the building who was identified as Jojo Kilantang.