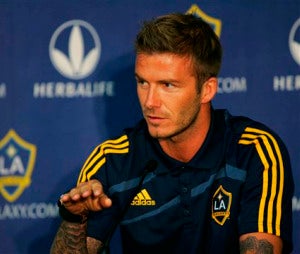 LONDON – The gynecologist who helped deliver the first child of Prince William and his wife Kate was given a knighthood and veteran actress Angela Lansbury was made a dame in Britain’s New Year Honors List released Tuesday.

For the first time since the list was founded in 1917 there were more women (51 percent) named than men — and two star sportsmen, Andy Murray and David Beckham, were notably absent.

Gynecologist Marcus Setchell, 70, who delayed his retirement to assist at the birth of Prince George in July, will be called ‘sir’ after being made a Knight Commander of the Royal Victorian Order — a personal honour from Queen Elizabeth II.

Lansbury, the 88-year-old British-born actress best known for her role as amateur detective Jessica Fletcher in US TV series “Murder, She Wrote”, was also handed a top honor, being made a Dame of the British Empire.

The twice-yearly list of the great and the good — issued at the New Year and on the queen’s birthday in June — recognizes those who have succeeded in their personal field, or those who have contributed to their community.

But Murray, Britain’s first Wimbledon men’s singles champion for 77 years, and footballer and global celebrity Beckham were two surprising omissions from the list.

Murray was touted as a possible recipient of a knighthood, although some commentators suggested it might be too soon after the player was given a lesser OBE (Order of the British Empire) after his Olympic gold medal in 2012.

Beckham, who announced his retirement earlier this year, was also tipped to be knighted for his sporting success and work on the London 2012 Olympics bid. He received an OBE in 2003.

Those who were honored included Antony Gormley, the Turner prize-winning sculptor behind the giant rust-colored “Angel of The North” in northeast England, who was given a knighthood.

Sir Simon Rattle, the British conductor of the prestigious Berlin Philharmonic, was awarded the Order of Merit, given to individuals of great achievement in the fields of the arts, learning and science.

The other recipient of the OM was world-renowned heart surgeon Professor Sir Magdi Yacoub.

Cuban-born ballet dancer Carlos Acosta was made a CBE, or Commander of the Most Excellent Order of the British Empire, which he said “was a huge surprise — and I feel privileged to be included”.

The 40-year-old, a regular guest artist at the Royal Ballet in London, has branched out into choreography, literature and film.

Opera singer Katherine Jenkins, 33, who raises money for charities that assist injured servicemen, said she was “incredibly honored” after being awarded an OBE.

She added: “To accept such an award after only a decade of service to music and charity comes as a wonderful surprise.”

Veteran actress Penelope Keith, who rose to fame in the 1970s sitcom “The Good Life”, becomes a dame, while the creator and co-star of the hit TV comedy “Gavin and Stacey”, Ruth Jones, was given an OBE.

Jones, who set parts of the show in her native South Wales, used the local slang to describe her award as not “just tidy, it’s proper tidy”.
“Apparently great uncle Leslie got an OBE in the 40s and uncle Jack the fireman got one in the 60s. So I’m keeping up with the Joneses, ha ha,” she added.

Most of the 1,195 people on the list are not well-known — three-quarters have been honored for their work in their communities, and two are Downing Street cleaners.