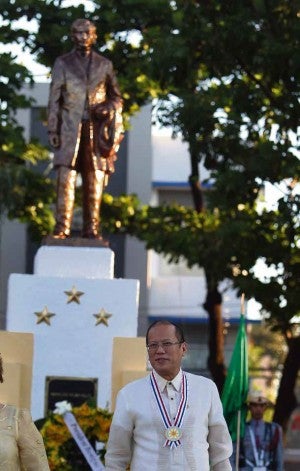 VACATION OVER Fresh from a three-day vacation in Baguio City, President Aquino leads the observance of the 117th anniversary of the execution of national hero Dr. Jose Rizal in Tarlac City on Monday. MALACAÑANG PHOTO

TARLAC CITY, Philippines—Until Monday, the 81-year-old Rizal monument built in 1932 through a P500 donation was just one of countless statues honoring the national hero in many parks of the country.

But it became extra-special on Monday when President Aquino dropped his original schedule at Baguio City’s Rizal Park to commemorate the hero’s 117th death anniversary in his home province.

The Tarlac rites featured a short 17-minute Rizal Day program, with the President leaving as soon as he accomplished his task. He did not deliver a speech.

It was the first time a Philippine President attended the annual Rizal Day rites at the Rizal monument here, which was built using a P500 donation from resident Alejandra Castañeda and funds raised by Tarlac community leaders.

President Aquino arrived in Tarlac on Sunday from Baguio City and spent Sunday night at his family’s house in Hacienda Luisita.

Officials raised the flag at 7 a.m. to approximate the time Rizal was shot at Luneta, then known as Bagumbayan, in 1896.

After the ceremony, Aquino left to meet with local leaders at a coffee shop in Hacienda Luisita.

The Rizal Day rites in Baguio City proceeded despite

The Rizal Park in Baguio, which is maintained jointly by the city government and the Knights of Rizal, also holds the Rizal Leadership Training Conference at the Teachers’ Camp every December.