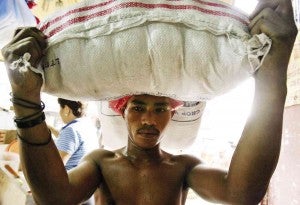 MANILA, Philippines—Apart from what he described as flaws in the customs processes, the new head of the Bureau of Customs has laid the blame for the continued rampant smuggling of rice on some of the country’s lower courts, which he said appeared to be protecting smugglers.

Customs Commissioner John Phillip Sevilla told the Inquirer that traders, whose shipments had been held by Customs for lack of import permits, had been running to the courts, which, in turn, “have been upholding them by issuing injunctions against the bureau.”

Sevilla accused the courts of tolerating or coddling violators of Customs regulations. “I’m really worried about that,” Sevilla said in a recent interview.

“Our intelligence personnel are risking their lives to get information that will allow us to seize [shipments] and then courts are going to issue injunctions just like that,” The BOC head said, uttering a barnyard expletive (bulls…t) as he referred to one court “in Davao.”

According to Sevilla, he heard “there’s another court injunction to be issued shortly” against the bureau.

“Are we joking here?” said the former finance undersecretary for privatization.

“Once the courts start giving protection to rice traders who have been caught smuggling, ibang usapan na ‘yan (that’s a different matter),” he continued. “We intend to challenge these court rulings very vigorously.”

Referring to an Inquirer report on lost government revenue of at least  P6 billion due to rice smuggling, Sevilla said “that’s only secondary, as far as I am concerned.”

“My primary consideration is the illegal trade’s adverse effects on ordinary farmers,” he said, adding “my first job was with the Department of Agrarian Reform, that is why, the issue is close to my heart.”

A certain “David Tan” has allegedly cornered rice smuggling in the country by showering an undisclosed number of Customs officials and rank-and-file employees with cash gifts totaling P6 billion over the last two years, according to a former BOC official.

The official, who spoke on condition of anonymity, told the Inquirer that Tan gave up to P20,000 in kickbacks for every 20-foot container of smuggled rice brought into the country.

One of the challenges facing the new management at the bureau was whether it could dismantle the network built by Tan, who allegedly “operates behind various brokerage firms.”

As early as February this year, senators investigating the existence of a rice smuggling cartel in the country had identified Tan as one of the financiers who bankrolled the syndicate of bogus cooperatives and enterprises  that cornered a huge chunk of the NFA’s rice importations under the Aquino administration.

The Department of Justice and the National Bureau of Investigation failed to act on the Senate investigative committee’s recommendation to go after Tan.

Last week, Sen. Ralph Recto said he would ask the Senate ways and means committee to take another look into the rice smuggling issue when Congress resumes session next month.

Smuggling at its worst under Aquino