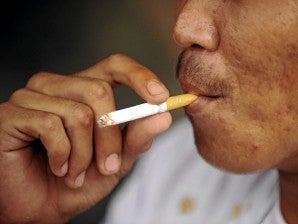 BEIJING— China has banned its officials from smoking in public to set an example to the rest of the country that has the world’s largest number of smokers.

The official Xinhua News Agency said that officials are not allowed to smoke in schools, hospitals, sports venues, on public transport or any other places where smoking is banned, or to smoke or offer cigarettes when performing official duties. They also cannot use public funds to buy cigarettes, and within Communist Party or government offices tobacco products cannot be sold nor adverts displayed.

Xinhua said Sunday the rules were contained in a circular from the Communist Party’s central committee and the State Council, or China’s Cabinet.

There is no nationwide law banning smoking in indoor public places, but the government has tried to ban the practice in the past. In 2011, the Health Ministry issued guidelines banning smoking in venues including hotels and restaurants, but these are not strictly enforced. Experts say huge revenues from the state-owned tobacco monopoly hinder anti-smoking measures.

“Smoking remains a relatively universal phenomenon in public venues. Some officials smoke in public places, which has not only jeopardized the environment and public health, but tarnished the image of party and government offices and leaders and has a negative influence,” the circular read, according to Xinhua.

China has more than 300 million smokers. Smoking, which is linked to an average annual death toll of 1.4 million people in China in recent years, is one of the greatest health threats the country faces, government statistics show. The annual number of cigarettes sold in the country increased by 50 percent to 2.52 trillion in 2012 compared with 10 years earlier, according to the Chinese Association on Tobacco Control, which is overseen by health authorities.