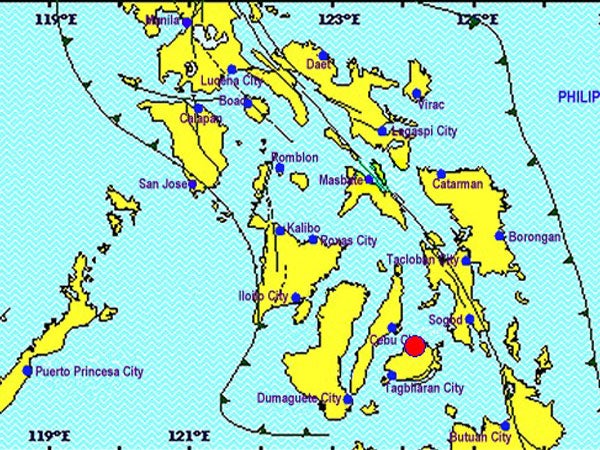 MANILA, Philippines—The  4.3 magnitude earthquake that shook portions of the Central Visayas Sunday afternoon was an aftershock of the powerful temblor that jolted Bohol and Cebu provinces two months ago, an official said.

The Philippine Institute of Volcanology and Seismology (Phivolcs) said that the aftershock was the 4,465th recorded by the agency from the October 15 magnitude 7.2 earthquake, the energy released equivalent to 32 Hiroshima bombs.

Phivolcs research specialist Henry Penarubia said that of the 4,465 aftershocks, 122 were felt, adding that it was normal for a major powerful earthquake to generate aftershocks long after it happened.

Penarubia said that the epicenter of Sunday’s earthquake, which happened at around 4:21 p.m., was 59 kilometers northeast of Tagbilaran City and had a depth of seven kilometers.

Based on the Phivolcs Earthquake Intensity Scale (PEIS), an intensity IV is moderately strong and may be felt by some people indoors and outdoors. The vibration felt is similar to that of a passing heavy truck and hanging objects swing considerably. Dinner, plates, glasses, windows and doors rattle while floors and walls of wood framed buildings creak. Standing motor cars may rock slightly while liquids in containers are slightly disturbed. A rumbling sound may sometimes be heard.

Magnitude is the measurement of the energy released at the source of the earthquake while intensity quantifies the strength of shaking produced by the tremor.