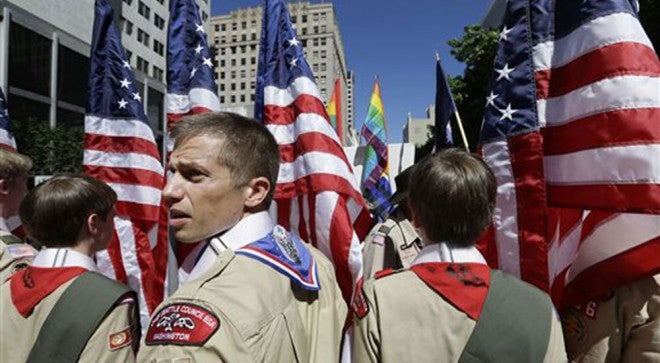 In this June 30, 2013 file photo, Boy Scouts from the Chief Seattle Council carry U.S. flags as they prepare to march in the Gay Pride Parade in downtown Seattle. The Boy Scouts of America, in the most contentious change of membership policy in a 103-year history, will accept openly gay youths in Scout units starting on New Year’s Day 2014. AP

The Boy Scouts of America will accept openly gay youths starting on New Year’s Day, a historic change that has prompted the BSA to ponder a host of potential complications — ranging from policies on tentmates and showers to whether Scouts can march in gay pride parades.

Yet despite their be-prepared approach, BSA leaders are rooting for the change to be a non-event, comparable to another New Year’s Day in 2000 when widespread fears of digital-clock chaos to start the new millennium proved unfounded.

“My hope is there will be the same effect this Jan. 1 as the Y2K scare,” said Brad Haddock, a BSA national executive board member who chairs the policy implementation committee. “It’s business as usual, nothing happens and we move forward.”

Some churches are dropping their sponsorship of Scout units because of the new policy and some families are switching to a new conservative alternative called Trail Life USA. But massive defections haven’t materialized and most major sponsors, including the Roman Catholic and Mormon churches, are maintaining ties.

“There hasn’t been a whole lot of fallout,” said Haddock, a lawyer from Wichita, Kansas. “If a church said they wouldn’t work with us, we’d have a church right down the street say, ‘We’ll take the troop.'”

The new policy was approved in May, with support from 60 percent of the 1,400 voting members of the BSA’s National Council. The vote followed bitter nationwide debate, and was accompanied by an announcement that the BSA would continue to exclude openly gay adults from leadership positions.

Under the new membership policy, youths can no longer be barred from the Cub Scouts, Boy Scouts or coed Venturers program solely on the basis of sexual orientation. However, gay Scouts will face some limitations.

“Any sexual conduct, whether heterosexual or homosexual, by youth of Scouting age is contrary to the virtues of Scouting,” says one BSA document. “No member may use Scouting to promote or advance any social or political position or agenda, including on the matter of sexual orientation.”

Trying to anticipate potential friction, the BSA has distributed extensive explanations and question-and-answer documents related to the policy.

—Could a Scout march in uniform in a gay-pride parade? No, says the BSA. “Each youth member is free as an individual to express his or her thoughts or take action on political or social issues but must not use Scouting’s official uniforms and insignia when doing so.”

—How publicly active could a gay Scout be, in terms of gay-rights advocacy? The BSA’s reply: “While a youth member may acknowledge his or her sexual preference, that acknowledgment may not reach the level of distraction, which may include advocacy, promotion, or the distribution of information of a sexual nature.”

A frequently-asked-questions document anticipates that some objections might surface from parents — or Scouts themselves — in cases where a unit includes an openly gay boy.

Regarding shower and toilet facilities, the BSA says it is encouraging units to provide greater individual privacy, including moving away from the tradition of group showers.

“The adult leaders have the discretion to arrange private showering times and locations,” the BSA says.

“If a Scout or parent of a Scout makes a request to not tent with another Scout, their wishes should be honored,” says the BSA.

Haddock says “isolated pockets” of problems are likely to surface, but overall he expects adult leaders will have the skills to defuse potential conflicts.

There are about 1 million adult leaders and 2.6 million youth members in Scouting in the U.S. Of the roughly 110,000 Scout units, 70 percent are sponsored by religious organizations, including several conservative denominations that had long supported the BSA’s exclusion of gay youth and gay adults.

Among the major sponsors, the Southern Baptist Convention made clear its disappointment with the new youth policy, but left the decision on whether to cut ties up to local churches. An SBC spokesman, Sing Oldham, said it was not known how many churches have done so.

The biggest sponsor of Scout units — the Utah-based Church of Jesus Christ of Latter-day Saints — commended the BSA for a “thoughtful, good-faith effort” to address a challenging issue, and said it would stay engaged in Scouting.

John Gailey of the Utah National Parks Council, the nation’s largest council, said its youth membership had increased from 74,148 in December 2012 to 75,863 this month.

Like the Mormons, the Roman Catholic Church has generally accepted the new policy. Many parishes will continue to sponsor Scout units, though a few have considered cutting ties.

The National Catholic Committee on Scouting posted a question-and-answer document on its website, delving into the intersection of Scouting policy and Catholic teaching.

“The Catechism of the Catholic Church teaches that individuals who disclose a same-sex attraction are to be treated with the same dignity due all human beings … and also teaches that engaging in sexual activity outside of marriage is always immoral,” says the Q-and-A, concluding that the new BSA policy does not contradict Catholic teaching.

The ultimate decision on whether parishes would maintain or cut ties with the BSA was left to individual bishops. Several expressed cautious support for continuing in Scouting.

“As the new policy currently stands, I see no reason to prohibit our parishes from sponsoring Boy Scout troops,” said Rev. Kevin Rhoades, bishop of Indiana’s Fort Wayne-South Bend diocese. “At the same time, it is critical that we be vigilant on how this new policy is interpreted and implemented.”

One likely target of such scrutiny will be former Defense Secretary Robert Gates, scheduled to take over in the spring as the BSA’s next president. As leader of the Pentagon, Gates helped change the military’s “Don’t Ask, Don’t Tell” policy banning openly gay soldiers, and gay-rights groups hope he will try to end the BSA’s ban on gay adult leaders.

The new youth policy was approved during a BSA meeting in May in the Dallas-Fort Worth suburb of Grapevine, near the Scouts’ national headquarters in Irving, Texas.

Texas has a long heritage of Scouting, with tens of thousands of youth members and many families claiming generations of Eagle Scouts. Among them is Gov. Rick Perry, who achieved Scouting’s highest rank growing up in the small town of Paint Creek.

The membership debate was closely followed by local Scouts on both sides; some carried signs and held rallies outside the meeting place. But in subsequent months, the debate has quieted.

Bill Helfand, scoutmaster of Troop 55 in Houston, said membership in his troop has remained steady at about 225 boys.

“We never considered sexual orientation, and I don’t think many troops really did,” Helfand said. “I don’t know whether we had Scouts who are homosexual. I don’t inquire … It’s not a matter of concern.”

Helfand said the membership debate, while closely covered in the media, did not extend into his meetings with leaders and parents, besides occasional discussion of the policy at camp-outs. He says he hasn’t talked to any Scout about his sexual orientation and doesn’t intend to.

However, some Texas parents and leaders have decided to switch to Trail Life USA, an alternative which declares itself “a Christian adventure, character, and leadership program for young men.” Among them is Ron Orr, a business consultant from the Fort Worth area who is signing up local units for the group.

So far, he said he has 25 groups “pre-chartered” for a Jan. 1 launch date in the territory covered by the BSA’s Circle Ten and Longhorn councils. That’s modest compared to the 39,000 Scouts served by the Circle Ten council alone.

Orr is part of a family with four generations of Eagle Scouts. His older son recently earned his Eagle rank and his younger son was on the verge of doing likewise. But Orr said he could not stand by after the policy change.

“As Christians, from a scriptural basis, we love all folks, but the scripture is very clear that being homosexual is a sin,” Orr said. “We’ve got to be able to hold a strong line and set a consistent example for our young men.”

Orr said his decision to cut ties with the BSA rested in part on the Scout Oath, which includes the admonition to remain “morally straight.”