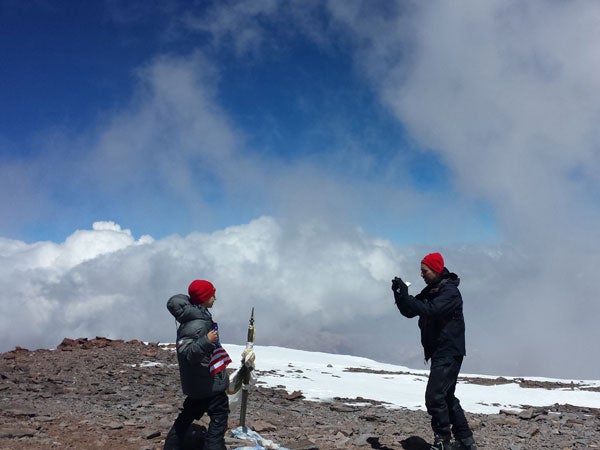 This Dec. 24, 2013 photo released by Lhawang Dhondup shows Kevin Armstrong, right, taking a picture of his 9-year-old son Tyler on the the summit of Aconcagua mountain in Argentina. Tyler, from Southern California, became the youngest person in recorded history to reach the summit when he reached it on Christmas Eve with his father Kevin and a Tibetan sherpa, Lhawang Dhondup, who has climbed Mt. Everest multiple times. AP

That’s what Tyler Armstrong managed to do on Christmas Eve, joined by his father and other climbers – with special permission from authorities for the underaged adventurer.

Aconcagua soars almost 7,000 meters in the Andes on Argentina’s Mendoza province along its border wirth Chile.

Armstrong has broken the record for youngest person to scale Aconcagua, said the head of his expedition, Nicolas Garcia, on local C5N television.

His mom, Priscilla Armstrong, wrote on the young climber’s website: “Super proud of you honey! I can stop worrying now! Actually, you will probably keep worrying me if you keep being so adventurous! Great- more grey hair!”