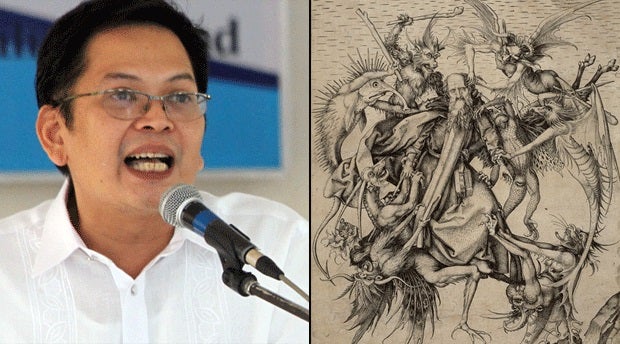 Customs chief John Phillip Sevilla talks about “demons” in the Bureau of Customs. The artwork is from an engraving by Martin Schongauer titled “The Temptation of St. Anthony” (c. 1480-1490), which can be found at the Metropolitan Museum of Art in New York.

Like his boss in Malacañang, newly appointed Customs Commissioner John Phillip Sevilla seems convinced the Bureau of Customs (BOC) is one of the most corrupt government agencies.

“If I were to believe all the text messages that I get, everybody here has four horns and two tails (apat na sungay at dalawang buntot),” Sevilla said in Filipino in an exclusive interview with the Inquirer on Thursday.

The former finance undersecretary said he had “never been in a place where there’s so much bad-mouthing.”

Sevilla said he had received many reports about irregularities supposedly involving BOC personnel.

“This early, the files are [over a foot] thick. I get more reports each day,” he said.

Sevilla stressed it was “important I should not get emotional about this,” although he said “human instinct dictates I should get angry.”

“What am I going to do, fire everybody?” he said.  “I know I can’t resort to that even if I have the power, which I don’t. You can’t just stop BOC operations for one week then look for their replacements.”

Sevilla said it should be made clear to all BOC personnel that “from now on, here’s your accountability … The basis of your future in the bureau is going to be how you perform.”

The BOC was among the agencies criticized by President Benigno Aquino III in his address before Congress last July.

“Where do these people get the gall?” the President asked then, referring to BOC officials and employees involved in smuggling goods, drugs and arms.

Surveys have also ranked the BOC as among the most corrupt government offices.

No complete picture yet

Interviewed on his 12th day in office, Sevilla admitted that he still had “a lot to learn” in his job.

“It’s no secret that I knew nothing about the BOC before coming in, so there’s a lot to learn … This is Day 12, so I can’t claim to have the complete picture,” he said.

Sevilla said that, for instance, he was “not yet familiar with the accountability of individual appraisers.”

“I think we need to establish what their functions are. Then, what are you accountable for? What is my objective basis? What is your supervisor’s objective basis to say whether you’re performing or not?”

Future rather than past

Asked about irregularities involving some BOC officials and employees that had been reported by the Inquirer, Sevilla said he was “much more interested in the future than in the past.”

“I have no time to investigate every single accusation against every single person here … I want to be very clear about that,” he asserted.

Referring to this paper’s Dec. 26 report on P6 billion in customs revenue lost owing to rice smuggling, Sevilla said, “Did anybody in the country get surprised about the news report that there are some powerful people who are conniving with BOC insiders in rice smuggling?”

“That did not surprise anybody,” he said.

Sevilla went on: “Let’s say tomorrow we’d be able to identify the erring BOC employees and we’ll have the best evidence against them and file a case against them. Does that solve the problem?”

Problem in the system

Some unnamed BOC personnel allegedly in cahoots with a certain “David Tan,” one of the big-time bureau players, were said to be behind the rice smuggling case.

“How is it these things happen? … I still don’t understand,” Sevilla said.

“Obviously, there’s a problem in the system,” he pointed out. “Assuming you’ve arrested somebody but your system stays the same, next week there’ll be another one.”

That is why, he said, “there’s a need to talk about the flaws in the processes of the bureau, which allow these things to happen and on a large scale and … for such a long time, whether it’s rice or any other product. They have the same modus operandi.”

Sevilla said he had “been hearing about [BOC irregularities] for years.”

“I didn’t know anything about [the BOC]. So what really happened that they could go on and on? How do we stop that?”

He said that what needed to be done now was “an internal process reform.”

Last week, the Inquirer reported that under-the-table deals supposedly among examiners, appraisers and other frontline BOC personnel and big-time traders were the causes of the bureau’s failure to meet its revenue collection goals.

A newly appointed BOC official, who spoke on condition of anonymity, told this paper that among the traders (or their fronts) were three people whom insiders call “Big Mama,” “Ma’am T” and “Mr. T.”

Citing alleged pork barrel scam operator Janet Lim-Napoles as comparison, the official said that, “like Napoles, these players make a lot of people at the Bureau of Customs happy with regular payoffs in exchange for the undervaluation of their imported goods.”

The source assailed a fellow official who, he claimed, interceded on behalf of one trader in an operation that resulted in millions of pesos in revenue losses to the government.

‘Culture of corruption continues at Customs’