Ex-NBI chief back as crime fighter 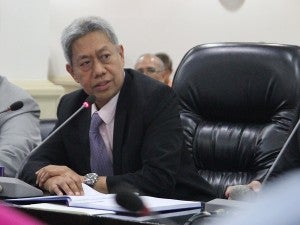 MANILA, Philippines—Former National Bureau of Investigation (NBI) chief Nonnatus Rojas is back to fight crime and bring justice to those seeking it.

But this time, Rojas, who stepped down as NBI chief three months ago when President Benigno Aquino III questioned the trustworthiness of some NBI officials, will return as state prosecutor in the Ilocos region.

Rojas had actually returned to his old job as regional prosecutor when President Aquino appointed him back to the Department of Justice’s (DOJ) National Prosecution Service.

“Welcome back to your original family,” a beaming Justice Secretary Leila De Lima told Rojas after he took his oath of office before her at the DOJ last Monday afternoon.

Asked by reporters whether he would have a less stressful job now compared to his days as head of the crime-fighting and law enforcing NBI, he conceded that it was in some ways.

The justice secretary also said that she had already submitted “fairly recently” to the President a short list of possible nominees for the NBI director post which is currently occupied by Medardo Delemos in an officer in charge capacity.

But De Lima declined to share her recommendations to the media.

“I just submitted it fairly recently so I don’t expect it to be acted upon before the end of the year. It might be in January or it really depends (on the President),” she told reporters.