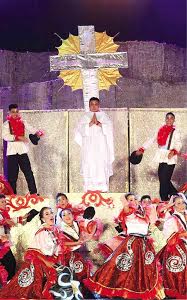 The Tan-ok Festival of Ilocos Norte celebrates the diversity of the province by drawing together all festival events of its 21 towns and two cities. PHOTO COURTESY OF THE ILOCOS NORTE GOVERNMENT

In the past three years, the Ilocos Norte provincial government had been trying to reinvigorate pride and unity among Ilocanos by staging the mother of all cultural festivals in the province.

This year’s celebration of the Tan-ok Festival on December 6 was a night like no other as the best artists and talents from Ilocos Norte’s 21 towns and two cities performed before 30,000 people at the Ferdinand Marcos Stadium in Laoag City, the provincial capital.

Their dance interpretations of local festivals showcased the unique history, culture and tradition of the hardy Ilocanos. They also gave a glimpse of their economy, their history, and their enduring faith.

This year, the event sold special tickets to raise funds for the construction of the building of the Philippine Red Cross provincial chapter.

“For the first time, we are helping raise funds for the Red Cross for its extraordinary efforts not only in times of calamity,” Marcos said in her welcome remarks.

“We thank them also for their unique and lasting contributions to the relief and emergency in Tacloban City, which has a special family connection to me and to all of us,” she said, referring to the capital city of Leyte, the home province of her mother, Representative Imelda Marcos.

Awarded the championship trophy was Laoag City’s performance of the Pamulinawen Festival, a call back to the courtship tale about an Ilocano bachelor who fell in love with a girl named “Pamulinawen,” who was also being wooed by a Spaniard.

The show’s biggest surprise was the Tadek Festival by the Tingguian people of Nueva Era town, which ranked second. Their performance was a thanksgiving dance to honor a newly married couple, who gave their blessings to the whole Tinguian community.

Nueva Era Mayor Aldrin Garvida said their presentation was as authentic as possible to the traditional rites. An Ilocano, Garvida is married to a Tingguian, former mayor and now Vice Mayor Carolyn Arzadon-Garvida.

The third placer, Batac City’s Empanada Festival, focused on the production and marketing of the “empanada” as a feature of its dance performance.

Performers of Vintar town showed off the white, red and brown siwawers, a legendary bird that symbolizes the townsfolk’s valor.

Dancers from Pinili town displayed their famous white gold harvest, the garlic, while those from Paoay town performed the 400-year-old “guling-guling,” which featured the St. Augustine Church as background. The church was enshrined as a World Heritage site by the United Nations Educational, Scientific and Cultural Organization (Unesco).

Currimao town showcased its Dinaklisan Festival by depicting the fun and nobility of fishing using the traditional and eco-friendly “daklis” (fishing net).

The gateway town of Badoc offered an artistic dance interpretation of the legendary arrival of the image of the province’s patroness, La Virgen Milagrosa. The Badoc performance also paid homage to Juan Luna, the first global Ilocano painter.

“This year, we are talking about not merely one night of festivals, spectacles, tremendous dancing, we are speaking of an investment for the days and years to come,” said Marcos.

The event was designed to revive what the province stood for and why being Ilocano made everyone proud, she said.

The Ilocos Norte Heroes Walk was also inaugurated at the Rizal Amusement Park in Laoag where the busts of Ilocano heroes were unveiled.

These included those of Gregorio Aglipay of Batac, the first Supreme Bishop of the Iglesia Filipina Independiente; Josefa Llanes Escoda of Sarrat, founder of the Girl Scouts of the Philippines; General Artemio Ricarte of Batac, father of the Philippine Army; Juan Luna and General Antonio Luna; Teofilo Yldefonso of Piddig, the first Filipino and Southeast Asian Olympic medalist who introduced modern breaststroke in international swimming competitions; the late strongman Ferdinand Marcos; Anastacia Giron Tupaz of Laoag, founder of the Philippine Nursing Profession; and Severino Montano, a nationalist playwright, who was also a native of Laoag.

The week-long Tan-ok festivities were concluded in Badoc on December 7 with the inauguration of its new chapel named after the La Virgen Milagrosa.