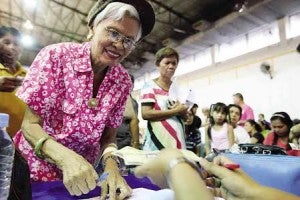 Unmindful of the drizzle, Delia Miñoza and her husband Felicisimo joined the crowd of other senior citizens in public elementary school gymnasiums here on Saturday to collect their P2,000 cash assistance from the city government.

Miñoza, 66, a retired public school teacher, said she could use the money to buy rice and medicine for her diabetes.

She and her husband, 67, were among those who lined up when the distribution center opened at 8 a.m. to collect their cash aid in crisp P500 bills. They had expected to receive P4,000 each, the balance of the P10,000 cash that City Hall was giving this year to help nearly 60,000 registered senior citizens.

“I’m a bit disappointed, but this is better than nothing,” Miñoza said.

Mayor Michael Rama had promised citizens the P10,000 assistance before he won a second term of office in the May elections.

It promised to give the remaining P4,000 in December, but, according to acting city treasurer Diwa Cuevas, only P2,000 could be released as the city was still waiting for additional revenues.

On Saturday, the city released a total of P120 million for the senior citizens, Cuevas said.

“The distribution was quick, smooth, peaceful and orderly inside the centers. The seniors were happy and thankful to the mayor for the orderly system of distribution,” city administrator Jose Marie Poblete said.

As of 3 p.m., 70 percent to 80 percent of the senior citizens had claimed their money, Poblete said. Those who failed to show up may visit City Hall to get their share.

Miñoza, a resident of Barangay Mabolo, said she hoped to receive the remaining P2,000 before the end of the year. She said she could use the amount for a power reconnection, although her overdue bill already reached a little over that amount.

The woman had already collected a lump sum from her government pension for the next five years upon her retirement in 2012. She will have to wait for the period to lapse before she can collect her monthly pension.

Her husband, a mechanic, does not have a regular source of income to support her and their four grandchildren—ages 17 to 24 years old—who are staying with them.

Wheelchair-bound Segundina Tolentino-Ko, 80, had her thumbprint taken before she got her P2,000 assistance.

Ko, who resides in Escaño Subdivision in Mabolo, held her money with one hand, seemingly mindless of what to do with it. Her third child, Ayty Ko, 56, took the bills from her and pocketed in her short pants.

Ayty said her mother had been confined to a wheelchair for the past three years after a mild stroke and also had Parkinson’s disease and diabetes.

Ko needs about P10,000 a month for maintenance drugs, milk and vitamins, but receives only P1,000 in monthly pension from the Social Security System.

“I am thankful for the city’s cash assistance because we really need this,” said Ayty, who is taking care of her mother. Her nine siblings are either working or residing abroad.