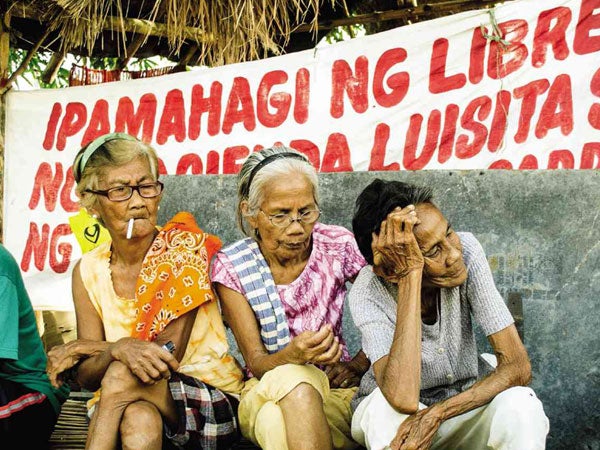 PROTEST CAMP Even elderly people joined a protest camp in Barangay Balete in Hacienda Luisita to secure farm lots, which their former landlords are claiming as theirs. They planned to spend Christmas there until policemen broke up their camp. BONG CLEMENTE/CONTRIBUTOR

Unlike the well-adorned homes and streets in Tarlac City, there is hardly any Christmas decor at Barangay Balete in Hacienda Luisita, the controversial sugar plantation owned by President Benigno Aquino III’s family.

That’s because the Balete farmers are embroiled in another dispute with their landlords over a 260-hectare lot, which was not among the 4,000 ha of agrarian land that was distributed to more than 6,000 Luisita farmers this year.

On Saturday, police broke up a protest camp set up by the farmers in the area.

The farmers were also sued by Tarlac Development Corp. (Tadeco), the Luisita estate administrator, for illegally taking over the farmlands.

Tadeco on Monday said the Dec. 21 incident “was a lawful exercise of ownership by the Cojuangcos.” It also said it filed charges of trespassing, malicious mischief and less serious physical injuries against Councilor Emy Ladera-Facunla for helping the protesters.

But the Department of Agrarian Reform (DAR) confirmed on Monday that it had placed under agrarian reform coverage “nine lots covered by eight titles located in Barangays Balete and Cutcut in Tarlac with an aggregate area of 358 hectares.”

Balete is located in Tarlac City, in an area hosting the Luisita Industrial Park.

The agency also warned Tadeco “against conducting any activities that may be tantamount to premature or illegal land-use conversion.”

Tadeco has disputed the DAR’s decision to place the property under the Comprehensive Agrarian Reform Program (CARP).

“The Cojuangcos were not furnished this alleged notice of coverage which, if true, is highly questionable,” the company said.

It said the contested lots were part of the 438-ha property owned by Tadeco that was classified as a residential area in 1985 and approved by the Tarlac City council.

“A mere issuance of a notice of coverage does not automatically transfer ownership. Due process requires that landowners who may be dispossessed of their property should likewise be given fair opportunity to avail of all legal remedies available to them, especially when divestment of ownership is invalid and unjust, to begin with,” Tadeco said.

The DAR said Tadeco had issued eviction notices to 134 Balete farmers, many of whom were among the recipients of the certificates of land ownership award (CLOA) that were distributed this year by DAR.

The certificates were issued to comply with a Supreme Court order affirming a 2005 decision of the Presidential Agrarian Reform Council (PARC) to distribute agrarian lands inside Luisita. The PARC had revoked the stock distribution option (SDO) being implemented in the estate that was based on a vote cast by the farmers.

But Florida Sibayan, a Balete resident, and many of her fellow beneficiaries did not accept the lands selected for them by the agency. They found that their designated lots were too far from their homes, unlike many of the Luisita beneficiaries who were awarded farms near their villages, Sibayan said.

She said she was prepared to celebrate Christmas in an improvised hut they set up on Dec. 17 to watch over the vegetable gardens and rice fields at the contested lots.

She said the farmers had resorted to camping at the area because some of their farms were bulldozed allegedly by Tadeco workers.

“We will spend Christmas in this hut. Until when we intend to stay, we cannot even say,” she said.

Leonor Layco, 67, another Balete resident, said she would spend P300 in tricycle fare to reach her allotted land at Barangay Pando in Concepcion town.

Facunla said 26 of her fellow villagers had received notices of complaints in the municipal trial court early this month for unlawful detainer, or illegal possession of a leased property.

She said the villagers reviewed the status of the Luisita properties and were surprised to discover that the contested property was no longer included in the agrarian reform area parceled out from the Luisita estate by the DAR.

The 2005 PARC decision had originally listed the contested property among the lots covered by agrarian reform.

Facunla said the DAR issued on Dec. 12 a certification that the agency had not received any Tadeco application for retention or conversion of the contested property.

On Dec. 17, the DAR published a notice of coverage of agrarian reform that included the same property.

The property had been fenced, and Tadeco had put up tarpaulins announcing that it would soon host a development project. A map that has been circulating around the village suggests that Tadeco plans to build the Luisita Industrial Park III in the area.