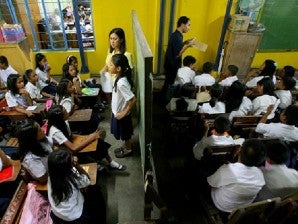 Two classes share one blackboard to save space due to lack of classrooms at the Payatas Elementary School in Quezon city. INQUIRER FILE PHOTO/MARIANNE BERMUDEZ

MANILA, Philippines—Despite fears of massive unemployment, the Department of Education (DepEd) on Saturday defended its decision to lay off casual workers, saying it was a way of “serv[ing] [the students] better.”

In a statement, Education Undersecretary for Operations Rizalino Rivera said the plan—under which casual and contractual employees were terminated on Dec. 15 to give way to a reorganization in the DepEd Central Office, and its other offices in the regions, except the Autonomous Region in Muslim Mindanao, and division offices in cities and provinces until March next year—aimed to “improve the quality and efficiency of government.”

Rivera also sought to correct what he said was misinformation about the plan among the DepEd employees.

He said the agency’s regular employees were not being asked to retire.

Instead, he said, the plan—being implemented in accordance with Executive Order 366 for the transformation of the organizations in the executive branch into “results-oriented” structures—gives options to all regular employees affected by the reorganization.

The options include staying in the agency or accepting optional retirement with additional benefits, he said.

Rivera said those who chose the first option may be “placed in a similar position” or may “choose coterminous to the incumbent status.”

“[That] means the [employees get] to keep [their] item with the same rank, salary grade and benefits until [they choose] to retire, resign or if [they get] appointed [other positions],” he said.

According to Rivera, 40-year-old regular employees who have been affected by the reorganization may “choose to keep [their] item” until [they opt] to retire at 60 to 65 years old or leave government service.’

“This is the only time that the item will no longer be refilled,” he said.

While schools were not included in the reorganization, he said the “same options for affected personnel” applied to school personnel “whose items were lodged under the Schools Division Office.”

Benjo Basas, head of the Teachers Dignity Coalition, a militant group of public school teachers, called the plan a “massive layoff policy” being implemented by the administration.

He also criticized the DepEd for providing “insufficient assistance to teachers and employees” in the aftermath of Supertyphoon “Yolanda.”

“The DepEd gave out lipsticks and makeup kits to teachers in Leyte instead of much needed relief goods, shelter and financial assistance,” he said.

Basas bewailed the bonus approved by the Department of Budget and Management for DepEd employees, saying it was 50 percent short of the P10,000 allotment during former President Gloria Macapagal-Arroyo’s term.

“This is the government’s Christmas gift to us,” he said.
RELATED STORY: