Senator Binay takes up the cudgels for brother | Inquirer News

Senator Binay takes up the cudgels for brother 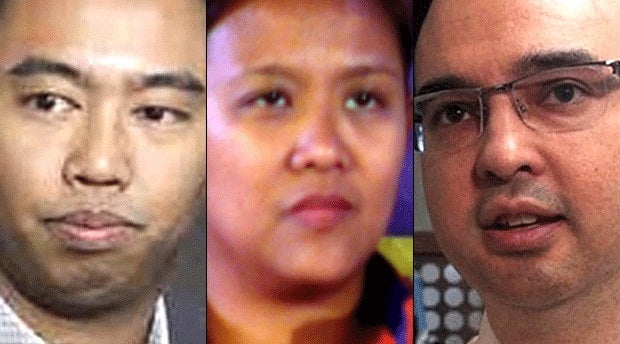 Senator Nancy Binay on Saturday bristled at Sen. Alan Peter Cayetano’s comments about the behavior of her brother, Makati Mayor Jejomar Erwin Binay Jr., during an altercation with security guards at an exclusive residential subdivision in Makati City three weeks ago.

Dropping her pronouncement of a “first and last official statement about the incident” on Thursday, Senator Binay, an eyewitness to the incident, said Cayetano could have easily verified with her the “true circumstances” of the Nov. 30 altercation at Dasmariñas Village before talking to the press on Friday.

Weighing in on the controversy on Friday, Cayetano said Vice President Jejomar Binay should tell his son to go on leave for 15 days to give way to an investigation of the incident by Interior Secretary Mar Roxas.

If indeed he’s running for President in 2016, the Vice President should set an example and dispel perception that political dynasties are abusive, Cayetano said.

The Inquirer report about that incident has drawn the attention of Caloocan Rep. Edgar Erice who said on Saturday that he would introduce a resolution for a House investigation of the Dasmariñas scandal to determine the extent of local officials’ power over police and see if this was being abused.

A video taken by security cameras at Dasmariñas showed Makati policemen aiding Mayor Binay in getting out of the village through a gate that was closed for security around midnight on Nov. 30.

Village security rules require the closing of the gate on Banyan Road to outgoing traffic after 10 p.m. Residents and guests should take the Palm Avenue gate, 150 meters away from the Banyan gate.

Mayor Binay, backed by a bodyguard with a cocked semiautomatic pistol and the policemen, had his way and left in a four-vehicle convoy through the Banyan gate.

For that, Mayor Binay’s group and the policemen may be liable for arbitrary arrest and unlawful detention, according to lawyer Berteni Causing.

Writing on his blog, Causing described the incident as “bullying,” adding that Binay’s group and the policemen could also be liable for graft.

The video of the incident, which has gone viral on the Internet, is sufficient for any lawyer to bring a case against Binay’s group and the cops, Causing said.

Another lawyer, Mel Sta. Maria, dean of Far Eastern University Institute of Law, wrote in his online column on Friday that even the Supreme Court had recognized that an “invitation” to the police station had become a euphemism for an arrest without warrant.

Causing agreed, saying that the Supreme Court, in resolving a case last year, ruled that there is arrest when there is actual restraint of liberty or voluntary custody.

Senator Binay said she had stayed away from the turf war between her brother and Taguig City Mayor Lani Cayetano, the senator’s wife, over Bonifacio Global City to avoid an escalation of tensions between the two cities.

“I am not one who comments on every issue just to get publicity and advance any political plans,” she said in a new statement. “And it’s not my character to malign others just to be in the media limelight.”

Senator Binay said she was saddened by Cayetano’s comments, adding that he could have called her first before talking to journalists.

“As a colleague, he could have talked to me first so he would know the truth,” she said.

“I kept my peace at the height of the dispute between Makati and Taguig over Fort Bonifacio so as not to raise tensions. I kept quiet when employees of Taguig were seen on CCTV [cameras] entering McKinley Road in Makati acting in an aggressive manner,” she said.

She said she stayed out of the controversy to avoid being accused of politicking or “riding on an issue that involves my city and my family.”

Otherwise, she said the Binay family had moved on and so had the other parties, and they did not want the “old issue” to be blown up.

“As far as we’re concerned, that issue is over, yet apparently some people want to keep it alive,” she said.

“Just the same, I look forward to celebrating the season of love and understanding with my family,” she said.

By “old issue,” Senator Binay meant the Dasmariñas Village incident, which Erice said must be investigated in aid of legislation to see if mayors were giving illegal orders to police.

“This is prevalent not only in Metro Manila but in the whole country,” Erice said in a phone interview.

He said the Dasmariñas Village incident was one more reason why his bill prohibiting political dynasties should be enacted into law.

The Binays are one of the country’s political dynasties, with four members in public office: the Vice President, Senator Binay, a sister who serves in the House as Makati representative and Mayor Binay. The Vice President’s wife is a former mayor of Makati.

Erice disputed contentions that mayors could override security rules in private subdivisions, referring to the argument of Valenzuela Mayor Rex Gatchalian who said on Friday that as mayor, Binay had jurisdiction over the entire Makati, including Dasmariñas Village.

Erice said that as a former vice mayor, he knew that there must be a council resolution authorizing the closing or opening of subdivision gates or private roads. Mayors cannot unilaterally order the opening or closing of private gates or roads, he said. With a report from Jerome Aning

Mayor Binay should have been told to go on leave, says Alan Cayetano