‘You know I’ll take a bullet for you’ 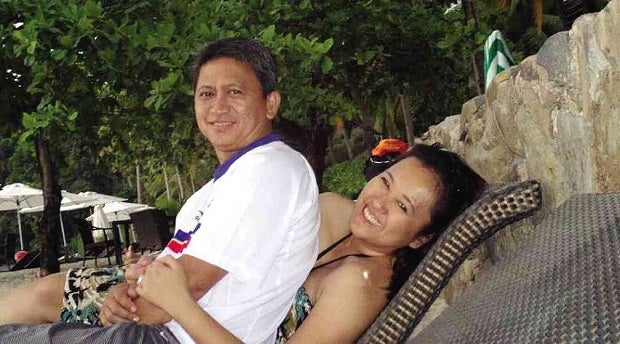 MANILA, Philippines – High-profile lawyer Raymond Fortun was by his wife’s side and rushing her to the hospital 10 minutes after she “miraculously” survived an attack late Thursday. The shooter, who he believed was really after him that night, sent a bullet through her cheek instead.

In Facebook posts on Friday, Fortun, who could be media savvy in the service of clients that earlier included a deposed President, recounted how the wounded Lumen Caroline responded when he sought forgiveness for “putting her in harm’s way.”

“She said: ‘Don’t cry. I love you. You know I will take a bullet for you,’” Fortun said in one post. “If my kids are angels, Carole is a saint. She is my Christmas present this year.”

Later in an Inquirer interview, the lawyer still sounded shaken as he dwelt on the grimmer aspects of the incident that nearly left him a widower.

“The bullet missed her carotid artery by mere millimeters. The carotid artery supplies blood to her brain. Had that been hit, she would have died of blood loss,” he said.

The Las Piñas police said Carole had just arrived at the Fortun residence on CRM Avenue, First BF Homes, Barangay Almanza Dos, Las Piñas, and was getting off her car around 8 p.m. Thursday when two unidentified men on a motorcycle approached.

One of the men then shot her pointblank with a pistol, hitting her in the nape. The bullet exited through her right cheek.

The city police chief, Senior Supt. Adolfo Samala, said investigators had recovered security camera footage showing that the two assailants followed Carole’s black car to CRM Avenue. One of the men was wearing a helmet while the other, a baseball cap.

Fortun, who was still on the road during the attack, arrived 10 minutes later to see Carole bleeding at the spot where she was shot, now surrounded by a few tricycle drivers. He had just returned from a trip in Iloilo province where he did a wedding photography project.

“When I was bringing her to the hospital in the car, she was still talking and wanted to sit up,” he recalled. Carole was already in stable condition and “very much conscious” as of Friday.

“The police told me that the gunmen used a hollow-point bullet, which is what hired killers use,” he told the Inquirer.

He said he was the gunmen’s “original target” but that they just decided to harm his wife upon realizing he wasn’t home.  “I make that conclusion by process of elimination. My wife is a kind person. She has no enemies, goes to Church. And this happens to her?”

Fortun also doubted whether the attack had anything to do with Carole’s job in the law firm. “We have no money problems or conflicts.”

“There was no indication we were in danger. I never experienced any threat ever, even when I was handling the case of former President Joseph Estrada,” he said, referring to the six-year plunder trial of the deposed leader which began shortly after Estrada’s ouster in 2001.

Fortun again made headlines this year as the lawyer of Marianne Cayton, the owner of the Two Serendra unit that exploded in May 31. Authorities later blamed the blast on a gas leak. Fortun last week said Cayton would be filing charges against the property developer, Ayala Land Inc.

On Facebook, Fortun said he begged for his wife’s forgiveness “for putting her in harm’s way, for handling cases against bad people who were not afraid to strike back through extra-legal ways.”