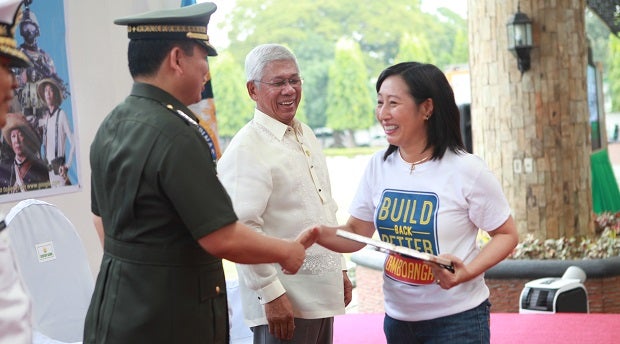 Zamboanga City Mayor Beng Climaco Salazar was one of the eight civilians awarded with the AFP Command Plaque on Thursday, at the kick off ceremony of the AFP anniversary at Camp Aguinaldo. More than 100 soldiers were also awarded. CONTRIBUTED PHOTO/AFP Public Affairs Office

MANILA, Philippines—More than 100 military personnel and civilians were awarded in the kick-off ceremony of the Armed Forces of the Philippines anniversary on Thursday.

Most of the enlisted personnel and officers recognized in the awarding ceremony participated in the Zamboanga siege last September. It was a three-week gunbattle with forces of the Moro National Liberation Front, which killed nearly 30 government forces. It displaced more than 100,000 civilians and killed nearly 200 persons, most of which were MNLF.

About 2,000 troops were deployed to battle the MNLF.

“This is one of the biggest, if not the biggest accomplishment of the armed forces in recent history because of the number of hostages that we rescued,” AFP chief General Emmanuel Bautista told reporters after the event.

He added there are “so many” military personnel deserving to be awarded.

More personnel will be awarded on Friday, the 78th day anniversary rites of the AFP. There are also speculations of a Medal of Valor awardee, the highest award in the military service.

“This is an important day for soldiers. You heard earlier how I lauded our soldiers. They risk their lives so we can sleep soundly at night. Have you tried being away from your family when your wife is about to give birth, or your parents get hospitalized? Or when you miss your child’s graduation day? A soldier sacrifices not for himself but for the country,” Defense Secretary Voltaire Gazmin told reporters in the sidelines.

In Thursday’s awarding ceremony, a total of 148 military personnel and civilians were awarded—14 personnel were awarded with Distinguished Conduct Star, the second highest combat award in the military.

Eight civilians were also awarded with the AFP Command Plaque. Zamboanga City Mayor Maria Isabelle Climaco-Salazar was one of the civilian awardees, for her “invaluable support to the AFP in the successful defense of Zamboanga City last September against hundreds of rogue Moro National Liberation Front.”

Other awardees on Thursday’s ceremony participated in humanitarian assistance and disaster operations during super typhoon Yolanda, Bohol earthquake, collision of MV Aquinas and MV Sulpicio, typhoon Quinta; as well as socio-economic activities of the military in Davao, Naga City, and Palawan.

An interfaith prayer service, blessing and commissioning rites of the new AW-109 choppers were the other activities at the AFP Thanksgiving day held at the General Headquarters canopy area.

First, last soldiers in Zamboanga siege not among Aquino ‘awardees’

‘Pride in all our soldiers’