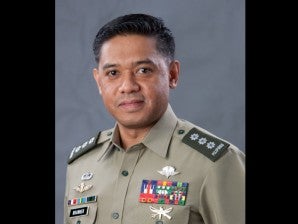 Colonel Romeo Brawner Jr. is one of the 10 commissioned and non-commissioned officers of the Armed Forces of the Philippines who received the award from Metrobank Foundation and Rotary Club of Makati Metro at Camp Aguinaldo on Monday.

Brawner, currently the chief of Plans, Policies and Programs Division of the Office of the Deputy Chief of Staff for Operations at Camp Aguinaldo, was recognized for his “numerous successful operations against insurgency.”

As a young platoon leader in 1991, he led the capture of one of the most wanted men in Nueva Ecija, Efren Evangelista, a rebel leader with a P40,000 bounty on his head.

During his stint as battalion commander of the Army’s 2nd Special Forces in Bohol from 2010 to 2012, he also led the capture of the province’s most wanted drug suspect.

He was also in command of the troops that recovered firearms, explosive devices and vital documents from rebel camps in Eastern Visayas and Caraga region.

Now with 24 years in service, Brawner graduated as Number 2 from the Philippine Military Academy “Makatao” Class of 1989. He also has nine relatives in the service.

As a soldier, Brawner said he considers his stint in Bohol as his most memorable experience as he was able “to directly contribute to the maintenance of peace in Bohol, Leyte and Cebu and the reduction of insurgents in Samar and Leyte.”

The officer also partnered with US-based non-government organization, Vaccines for the Philippines, in the construction of a medical clinic and birthing center and two-classroom school building in Bohol that benefited the residents who needed to travel for more than an hour just to get to the hospital and school.

“Itong recognition is not just for us na nanalong taon na ito but for the whole AFP. Dahil sa award na ito pinapakita ng civilian sector, private sector how much they appreciate the sacrifices of the soldiers so that we can enjoy the democracy we have now,” he told reporters after the awarding ceremony.

“We feel proud, we feel honored, but at the same time we feel humbled. Personally, naniniwala ako na every award, every promotion comes from the Lord. And so we want to bring back that glory to the Lord. We’d also like to thank Metrobank Foundation and Rotary Club of Makati Metro for this award,” he said.

Other TOPS awardees include Hospitalman Third Class Sergs Estropigan of the Philippine Navy, currently assigned at the Naval Diving Salvage Unit 1 of the Philippine Fleet, for his “exemplary sense of volunteerism, courage and perseverance” as technical diver and chamber operator of the search and rescue team, when he helped locate two missing pilots of the ill-fated SF-260TP plane that crashed near Mariveles in Bataan last year. He was also part of Task Force Kalihim to late Interior Secretary Jesse Robredo, wherein he was one of the two divers that retrieved the body of Robredo.

Lieutenant Colonel Moises Micor, Director of the Directorate for Aircraft Maintenance and Management of the Office of the Assistant Chief of Air Staff for Logistics, was instrumental during the onslaughts of Abu Sayyaf and Moro National Liberation Front in Mindanao in 2001. Metrobank noted that his flight, despite a seriously damaged aircraft, was “very instrumental” in the camp defense of 104th Brigade and Camp Budatu where he assisted in the extrication of casualties of the beleaguered members of the First Scout Ranger Battalion.

The TOPS awardees were given a cash prize of P300,000 and a specially designed trophy from the Metrobank Foundation. They will also be honored together with the winners of the Search of the Outstanding Teachers and Country’s Outstanding Police Officers in Service at Metrobank’s anniversary in September.

The Metrobank Foundation and the Rotary Club of Makati Metro annually hold the search for TOPS “to honor the gallant men and women of the Armed Forces who go beyond expectations, and to highlight their achievements and efforts toward nation building and development.”