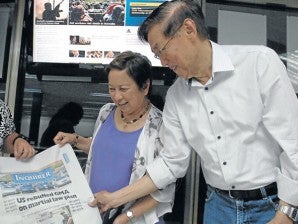 INQUIRER NEWSROOM. NDF negotiator Luis Jalandoni and wife, Coni Ledesma, view a front page proof of the Inquirer during a visit to the newspaper office on Tuesday. JIM GUIAO PUNZALAN

The government and the communist-led National Democratic Front (NDF) have agreed to resume peace talks sometime between late October and early November even as both sides issued conflicting statements on the release of jailed rebels.

The NDF also bared initial talks with two government emissaries early this year about the creation of a “Council of National Unity,” which would serve as a “consultative-advisory” transition group for multisectoral participation in state affairs.

Although it was discussed in bare terms, the council is envisioned to replace the NDF’s proposal for a “coalition government” on its 10-point peace agenda.

“It is a bold and innovative proposal. It involves risks on both sides,” NDF chief negotiator Luis Jalandoni said during a meeting with Inquirer editors and reporters on Tuesday night.

The NDF is the umbrella organization of the Communist Party of the Philippines and its armed wing, New People’s Army, which has been waging a guerrilla war in the Philippines for over 40 years.

“In our 10-point proposal is written “coalition government,” but in our discussion with the emissaries, we can instead come up with a council of national unity with the cooperation of both sides, with equal representation from business, NGOs, approved by both sides,” Jalandoni said.

Jalandoni said emissaries were sent by President Aquino to Utrecht in April in response to the NDF’s letter of truce which was “hand-delivered” to Malacañang on January 18.

The truce offer seeks to end hostilities, but there will be “no surrender of principles, no surrender of arms” on the part of the rebels, Jalandoni said.

Explaining the proposed Council of Unity, Jalandoni said that “at first, it will serve as a consultative and advisory body so as not to disturb GPH (government of the Philippines). It’s like a transition mechanism. Between the two (NDF and GPH), they could choose representatives.”

Jalandoni said the council would cooperate on food, renewable energy, mining and other development projects, and exercise vigilance on foreign involvement in industry, which, he described as a critical aspect of the rebels’ peace agenda.

On Tuesday, Jalandoni met with the government’s chief negotiator, Alexander Padilla, over an hourlong lunch hosted by Norwegian facilitator Ture Lundh at the residence of Norway’s ambassador in South Forbes, Makati City.

Both camps expressed optimism that the long-stalled talks would finally prosper when they meet in Oslo next month for 12 days of negotiations.

In a statement, Padilla said the panels had agreed to resume talks “without preconditions” and that the government had not yielded to the NDF’s demand to release its 13 “consultants” in state custody.

“There were no commitments made to release detained alleged NDF consultants, but the air was positive for the resumption of the talks, and the GPH did not close the door on further releases,” Padilla said.

But Jalandoni said that both sides agreed to “take positive” steps toward such an end. The NDF has been demanding the release of persons who, it said, were protected under the Joint Agreement on Safety and Immunity Guarantee (Jasig).

“Alex and I talked and both sides agreed there would be positive, definite steps to be undertaken by both sides, including, of course, the releases of NDF consultants and protected persons of Jasig,” Jalandoni said.

“Both agreed to find a way where there will be no media confrontations on both sides, to stress the positive aspects,” Jalandoni said.

Jalandoni said Lundh had the same sentiment and told both panels to “take the positive steps needed, including the release of the NDF consultants, all or most as the NDF had asked for.”

Jalandoni said the meeting at the Norwegian ambassador’s house ended in an exchange of contact numbers—both mobile and landline—and that both sides, plus the facilitator, committed to keep communication lines open at all times.

“We agreed that if there was a problem, we can call each other so we exchanged telephone numbers … [Lundh] said that every week, we would get in touch with each other to see that everything is on track.  So it came out cordial and fruitful,” Jalandoni said.

“The atmosphere was very cordial, very nice. The meeting was also very fruitful. Chair Alex Padilla is very optimistic and he says that it’s always good to hope,” the Office of the Presidential Adviser on the Peace Process said in a statement sent to the Inquirer.

Jalandoni said the upcoming talks would tackle social and economic reforms, a “major part of the agenda.”

Working groups of both camps will also discuss political and constitutional reforms, while the joint human rights monitoring committee will meet on prevailing concerns, including Jasig.

Jalandoni arrived in Manila on August 21 for consultations with NDF leaders, among them legal counsel Romeo Capulong, and to visit the 13 detainees. On September 14, Jalandoni will fly back to Utrecht, where he has been residing for 35 years now.