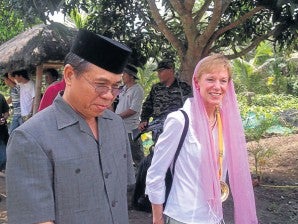 US INTEREST IN MINDANAO. Then US Ambassador to the Philippines Kristie Kenney and Moro Islamic Liberation Front chief Murad Ebrahim emerge from a closed-door meeting at Camp Darapanan in Maguindanao on Feb. 19, 2008. EDWIN FERNANDEZ/INQUIRER MINDANAO

Purported secret US Embassy files released by the whistle-blowing WikiLeaks showed that Washington had a direct hand in the ill-fated deal to create a Bangsamoro Juridical Entity in 2008 that critics warned could lead to a dismemberment of the Philippines.

Former Bayan Muna Representative Satur Ocampo said that this “disturbing pattern” of American intervention in the Philippines was apparently triggered by a letter sent by then Moro rebel chief Hashim Salamat to US President George W. Bush on Jan. 20, 2003.

Ocampo said that that US interest was clearly seen from the terms of the Memorandum of Agreement on Ancestral Domain (MOA-AD), which was declared by the Supreme Court as unconstitutional in 2008, where the funding for socioeconomic projects in Mindanao would be handed over to the World Bank and the US Agency for International Development (USAID).

Ocampo said the Arroyo administration’s peace negotiators apparently were not too keen on the US involvement that they leaked the MOA-AD a few days before it was supposed to be signed in Kuala Lumpur in August 2008 in the presence of then US Ambassador Kristie Kenney.

The chief Philippine negotiator, General Hermogenes Esperon, apparently gave the document to then North Cotabato Governor Manny Piñol  because the Arroyo administration felt the United States would be getting too much economic power under the deal, said Ocampo. Piñol later went to the Supreme Court to contest the agreement.

“We are therefore appealing to the basic principle of American fairness and sense of justice to use your good offices in rectifying the error that continues to negate and derogate the Bangsamoro People’s fundamental right to seek decolonization under the United Nations General Assembly Resolution No. 1514 (XV) of 1960. For this purpose, we are amenable to inviting and giving you the opportunity to assist in resolving this predicament of the Bangsamoro People,” Salamat wrote to Bush.

US officials have declined comment on the substance or authenticity of the WikiLeaks papers.

Ocampo said Salamat’s letter set the tone for the peace agreement as a way for the United States to rectify its “sins” when it ceded Bangsamoro land in Mindanao to its then Philippine colony.

Based on the 07MANILA3676 cable classified as secret, “the first ever official US government meeting with the leader of the Muslim insurgent organization engaged in peace talks with the government” was held in November 2007 inside Camp Darapanan, near Cotabato City.

In her report, Kenney stated: “Our direct engagement is clearly welcomed by all parties and can help pull the complex peace process toward concrete progress, possibly including step-by-step eradication of terrorists from Mindanao.”

Murad, who was described as “friendly, confident and well-versed” and spoke excellent English, “suggested during the meeting that the US sign a protocol supporting the peace agreement along with other countries because he feared that Congress would not give its approval to the deal without international support,” Kenney said.

The WikiLeaks documents showed persistent questions on the constitutionality of the MOA-AD and resistance from “conservative forces” in the Arroyo Cabinet and Congress.

Aside from getting the details of the MOA-AD, the US Embassy was also advised about a “two-tier advocacy and public relations campaign to prepare for the congressional action/plebiscite required after a territorial agreement is signed.”

“To ensure that the parties stay focused and push the process forward, Mission officials continue to engage the parties at the most senior levels … making clear that the US  strongly supports a peace agreement that will help bring  prosperity to Mindanao and remove safe havens for terrorists,” the report said.

“We continue to press both sides to come to agreement soon on the significant set of governance, territory, and natural resource issues currently under negotiation. Such an agreement would be a significant milestone and open the field for advocacy and increased attention to security issues in the next stage of negotiations.”