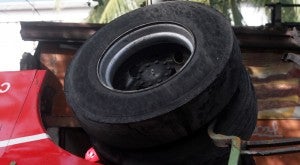 ‘UNSAFE AT ANY SPEED’. Bald tires may have led to hydroplaning of the speeding Don Mariano Transit on the southbound lane of the Skyway in Parañaque City near the Sucat exit on Monday. Hydroplaning occurs when a fast-moving object like a bus glides on a wet surface, making it difficult to control. The bus plunged onto the West Service Road in Barangay Marcelo and hit a van. Eighteen people, mostly bus passengers, were killed and 16 others were injured. NIÑO JESUS ORBETA

MANILA, Philippines—Criminal charges have been filed against Don Mariano Transit and the driver of its bus that fell from the Skyway and landed onto a van, killing 18 persons and wounding over a dozen others, the spokesperson of the Philippine National Police’s Highway Patrol Group said.

In an interview on Inquirer Radio 990AM, Police Superintendent Elizabeth Velasquez said the owner of the bus line and bus driver Carmelo Calatcat were charged with reckless imprudence resulting in multiple homicide and physical injuries before the Parañaque Hall of Justice.

She said that while authorities have yet to determine what really caused the accident, some survivors claimed that Calatcat looked sleepy and in bad shape, while others observed the bus’ tires were worn out.

Calatcat, still in critical condition in hospital, has yet to give his side of the story.