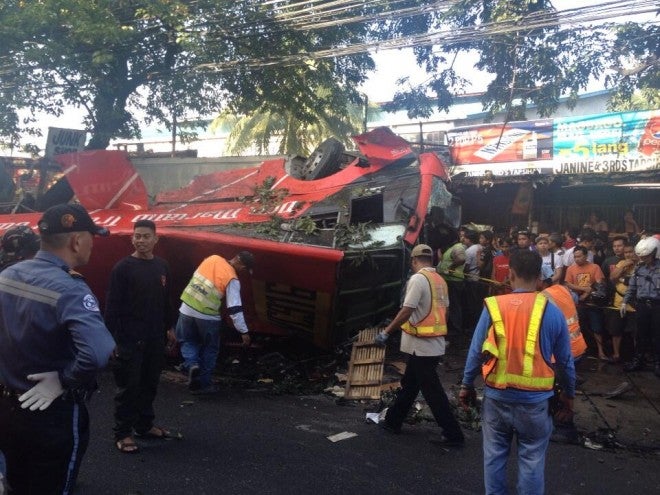 MANILA, Philippines – The Toll Regulatory Board (TRB), along with other concerned agencies, will look into how a bus plunged from the elevated Skyway on Monday morning for comparison to a tragic incident in 2011 at the same highway.

A Don Mariano Transit bus plying the southbound lane of Skyway fell and crashed on a van below along the South Luzon Expressway (SLEx) in Parañaque City at 5 a.m., killing at least 22 people.

TRB Executive Director Edmund Reyes told Inquirer Radio 990AM that they may launch an investigation if there are patterns in the recent accident and a parallel incident in 2011 when a Dimple Star Transit bus rammed the steel railings of the Skyway and fell, killing two passengers and the driver.

Reyes pointed out that hundreds of thousands of vehicles pass the expressway everyday, but there were only two incidents of buses falling off the raised highway.

Inquirer Radio 990AM said the Don Mariano Transit bus was driving along the southbound lane of the Skyway, just a few kilometres from where the Dimple Star Transit bus crash in 2011.

Pictures of both accidents showed the Don Mariano bus was resting on its side while the Dimple Star Transit bus was standing vertically. The latter also had fewer passengers.

The TRB chief said they would first focus on fact-finding that would include checking if there are available CCTV footage to study the chain of events leading to the accident.

He also pointed out that Skyway had set the 80-kilometer per hour (kph) speed limit for buses and 100-kph for cars.

Reyes said that they have been strictly enforcing the law and increasing the number of apprehensions of erring motorists.

While investigators have yet to determine what really caused the bus to plunge from the Skyway, Jacaban quoted one of the victims as saying that the bus driver, identified as Carmelo Calatcat, allegedly lost control of the overspeeding vehicle.

The van’s driver was killed and the bus driver was in serious condition in a hospital, according to a report from wire news agency Associated Press (AP).

She said it was still dark and it was raining when the accident happened.

“After a few meters, I saw the bus fell and I shouted, ‘The bus fell, the bus fell’,” she said in a radio interview, adding there were no other cars nearby.

Sisperes said she saw the damaged railing of the highway and some debris and reported the incident at the toll gate.

“Investigators of this office are still scouring other hospitals in the AOR (area of responsibility) for the identification and update on the status of the other victims,” Jacaban said.

22 killed after bus falls from Skyway