Japan set to buy $240B worth of hi-tech weapons 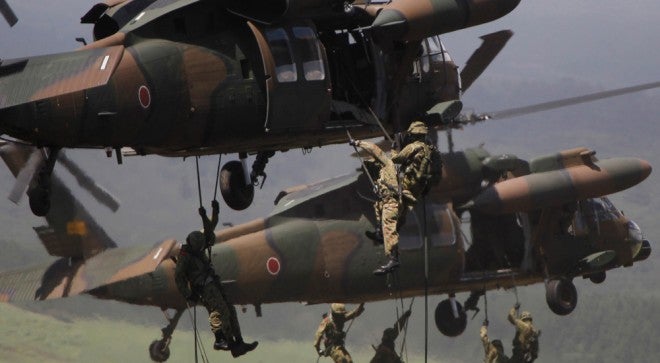 Members of Japan Ground Self-Defense Force rappell down from a UH-60JA helicopter during the annual live-fire drill at the Higashi Fuji training range in Gotemba, southwest of Tokyo on Aug. 21, 2013. Japan’s new defense plan, approved on Tuesday Dec. 17, 2013, calls for the purchase of stealth fighters, drones and submarines as part of a splurge on military hardware that would beef up defense of far-flung islands amid a simmering territorial row with China. AP PHOTO/KOJI SASAHARA

TOKYO—Japan announced on Tuesday that it would buy stealth fighters, drones and submarines as part of a splurge on military hardware that would beef up defense of far-flung islands amid a simmering territorial row with China.

The Cabinet of hawkish Prime Minister Shinzo Abe agreed to spend 24.7 trillion yen ($240 billion) between 2014 and 2019 in a strategic shift toward the south and west of the country—a 5-percent boost to the military budget over five years.

The shopping list is part of efforts by Abe to normalize the military in Japan, which has been officially pacifist since its defeat in World War II. Its well-equipped and highly professional services are limited to a narrowly defined self-defensive role.

Abe’s plan to upgrade Japan’s military capability comes with the establishment of a US-style National Security Council that is expected to concentrate greater power in the hands of a smaller number of senior politicians and bureaucrats.

Fears are growing in Japan over the rising power of China, with the two countries embroiled in a dispute over the sovereignty of a group of islands in the East China Sea, and the perennial menace posed by an unpredictable North Korea.

Abe said the shift would allow Japan’s military to better shoulder its responsibilities on the global stage, through what he has promoted as “proactive pacifism.”

“We hope to make further contributions to the peace and stability of the international community through proactive pacifism,” he said. “This shows with transparency our country’s diplomatic and defense policies.”

The spending will also encompass two destroyers equipped with the Aegis antimissile system and 28 new F-35 fighter jets, a stealth plane far superior to the F-15s that Japan currently has in service.

Analysts noted that much of this kit will replace obsolete equipment, but the shift in military priorities is evident.

“The guidelines underscore a clear shift of Japan’s major defense focus to the protection of its islands in the East China Sea,” said Hideshi Takesada, an expert on regional security at Takushoku University in Tokyo.

During the Cold War, Japan’s military was largely static, with the majority of resources in the north and east to guard against any invasion by Russia.

But changing dynamics and in particular the rise of China—where double-digit rises in defense spending are the annual norm—mean that Japan’s armed forces need to be located further south and to be able to deploy to the country’s many far-flung islands.

Abe on Saturday denounced the declaration and demanded Beijing retract it immediately and unconditionally, after a summit with Southeast Asian leaders where a joint statement called for freedom of travel on the seas and in the air.

The guidelines also call for Japan to boost its missile defense system to counter “a grave and imminent threat” from North Korea.