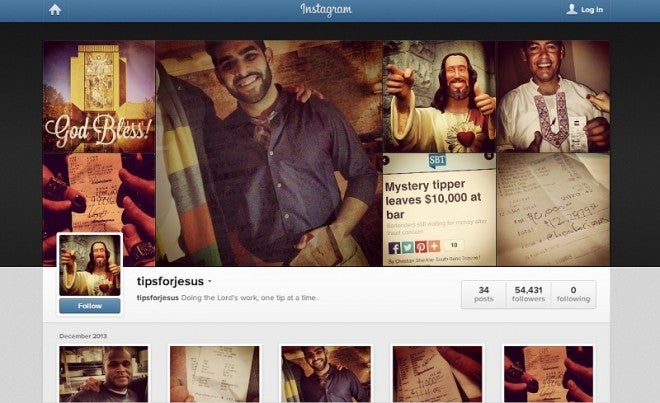 The handle @tipsforjesus is stamped next to an illegible signature.

In recent weeks, similar tabs have popped up in restaurants from coast to coast and even in Mexico, with tips of as much as $10,000 — all charged to American Express.

On Sunday just after midnight, the mysterious man surfaced again — this time in Fairfield, Connecticut. He left a $5,000 gratuity on a $112 bill at the Seagrape, an eatery where college kids drop by for cheap beers by the beach.

Tips for Jesus — an Instagram account filled with photos documenting the tips — has more than 54,000 followers. The account displays photos of smiling servers holding receipts with outlandish gratuities on bills also tallied in Los Angeles, San Francisco, Chicago, Phoenix and Ann Arbor, Michigan. On Twitter, Tips for Jesus has nearly 3,000 followers but no tweets.

The Instagram feed comes with the tagline, “Doing the Lord’s work, one tip at a time.”

Three Manhattan restaurants were especially blessed the first weekend of December. A waiter in the restaurant of the NoMad Hotel got a $7,000 tip, another at The Smith restaurant was left $3,500, and $1,000 went to Aruj Dhawan, a 25-year-old fashion marketing student and immigrant from India working at Bo’s Kitchen & Bar Room.

When they were gone, “Aruj approached me, handed me the receipt and said, ‘Is this for real?'” said general manager Benjamin Cramer.

Again, before leaving, the tipster had snapped a photo of the waiter with the check and posted it on Instagram.

The tipster also wrote his cellphone number at the bottom of the tab, telling Cramer to call him if American Express had any issues with processing the receipt.

After seeing the amount, Cramer said he understood why the credit card company might be suspicious and he himself was curious. So he called the number. The man who answered reassured the manager that the tip was real.

The man demanded anonymity, so Cramer did not pursue tracking his identity.

A $1,000 tip also went to a waiter at the Hungry Cat in Los Angeles after three men finished their dinner, said restaurant spokeswoman Jannis Swerman. One of them stamped the check @tipsforjesus.

In another photo, a Phoenix bartender beams looking at his $2,500 tip.

“This middle-aged gentleman came in with a woman, and they sat at the bar,” says Micah Olson, the bartender at a restaurant called Crudo who served them one of the most expensive whiskeys at $70 per ounce.

“They sat at the bar and had 5 ounces total,” Olson says. “The guy was really cool and bought me two ounces.”

The man asked for the check — $530.67 — and paid with his Amex “Black Card,” an invitation-only charge card issued to affluent clients.

One day last week, “I saw him looking so happy, holding the check,” said Benito Robles, a concierge at the resort. “I asked him, ‘Why are you smiling?’ and he showed me the tip.”

Mendez went home to his wife and two kids in a nearby village and took some vacation, according to Robles.

Across the land, restaurant servers are posting pleas on Instagram asking the mysterious tipster to visit them, giving exact locations.

He’s not the only one with a knack for generosity at the table.

Seth Collins, of Lexington, Kentucky, has been leaving $500 tips around the country — following his late brother’s instructions.

Before Aaron Collins died last year, he gave his brother a mission: Eat, be merry and leave a giant tip.

Through his family, he’s given away more than 80 tips throughout the U.S.