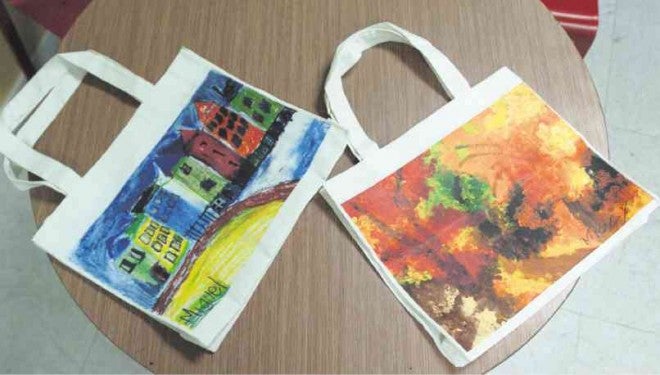 Samples of the boys’ Echo Bags which sell at P399 each. Half of the proceeds will go to the artist while the rest will go to the Differently Special Achievers Movement’s mentorship fund. RODEL ROTONI

A new line of Filipino-made bags is making waves in the United States, Japan, Malaysia and Iraq not just because of its brand and quality but also its “backstory.”

Called Echo Bags, the simple white cloth bags that have reached as far as California showcase the artwork of two extraordinary children with very special talents.

Miggy Ignacio, 9, and Miguel Pedroso, 11, who were both diagnosed with autism at the age of two, are the first artists to be featured in the project of the Differently Special Achievers Movement.

Founded earlier this year, the nongovernment organization (NGO) provides training and recreational programs for differently abled persons, focusing on “expression” and “mentorship” to help them realize their full potential.

“The expression phase is what we are doing with the Echo Bags. We are featuring the works of kids who have already discovered and developed their talents,” said Karen Navarro, an occupational therapist and one of the NGO’s cofounders.

Through the project, the movement hopes “to create that reverberating sound everywhere that these kids are special and they can do great things,” she told the Inquirer in a recent interview.

As for the second phase of mentorship, Teacher Karen, as her students fondly call her, said that this would be in the form of art programs to be conducted by their group in special education (SPED) schools across the country.

She told the Inquirer that Miggy and Miguel joined summer art classes as part of their therapy in May 2011 at the TW Community Enablers Inc. center in Makati City. Struck by their extraordinary art talent, the Differently Special Achievers Movement tapped them to be the featured artists in its Echo Bags project. 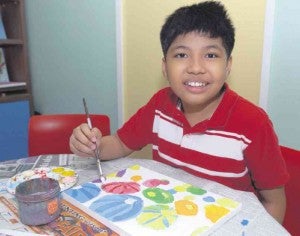 Since he discovered art, Miguel Pedroso has become more relaxed and less prone to temper tantrums.

“We are selling these bags at P399 each. Half of the proceeds will go to the artist and half to the mentorship fund of the organization, which will target less privileged persons with disabilities come next year,” she added.

However, Mae Ignacio, Miggy’s mother, told the Inquirer that they were waiving their share of the proceeds from the sales of his bags. According to her, this was their way of giving back to the project and inspiring other kids like Miggy who have a unique talent.

She said that painting has become her boy’s way of communicating with her, his father and younger sister. Diagnosed with autism when he was just two years old, Miggy finds it hard to start a conversation and make eye contact with other people. But Mae said that although her son may not talk a lot, his paintings speak volumes.

“All his works which are mostly displayed inside our house are expressions of his unique and rare feelings so it was hard for us decide whether we wanted to exhibit his works and let the whole world know about it,” she explained.

She added that after giving the matter some thought, they eventually agreed because they were advised by therapists to share a part of their son’s talent with the world and inspire other people.

“We allowed them to showcase some of Miggy’s paintings but not all of them. We will not be totally selfish but we cannot be totally giving as well because we still want to keep an important part of who he is,” she said. 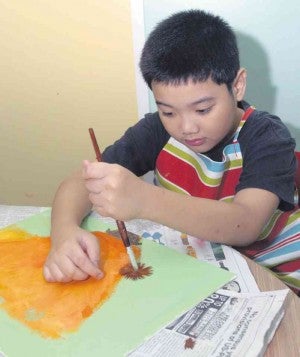 For Miggy Ignacio, painting is his way of communicating with his family.

Mae added that this was also their way of telling other people that kids like Miggy are as special as other children.

An inspiration to others

“We want to inspire other kids with Miggy’s achievements; what he is doing for himself and others,” she said. She also told the Inquirer that her son has since become more behaved and displayed more focus whenever he is painting.

“His first painting was a horse which he drew on our house floor,” his mother said.

In one of his art sessions where the Inquirer was present, Miggy’s teacher Thea Shiela Ocheda-Alonto or Teacher Shiela constantly reminded him to relax and be calm.

“The greatest challenge for me in teaching art classes to these kids is when they are not compliant. Miggy, [for example] is very hyperactive,” she said as she guided him in shading a portion of his work.

Although this could be difficult, she noted that these children have taught her that at times, it is their imperfections that result in a very good product or painting.

Miguel, for his part, has shown a lot of improvement in his art, Teacher Shiela said.

“Of all the kids, I’ve worked with, Miguel is the most improved in handling the brush,” she told the Inquirer.

Miguel, who introduced himself to the Inquirer at the start of the interview, loves talking about food and laughs when he feels uneasy and stressed out.

His father, Michel Pedroso, who smiled every time Sheila praised his son’s efforts, told the Inquirer that he and his wife, Carmela, discovered his talent in painting when he started drawing very clear and detailed shapes.

“Doodling was his way of relaxing in our house. He is also happier when he paints and has fewer temper tantrums,” he said.

Sheila, meanwhile, said that her end goal for the project was to have the kids paint and create art even without her assistance.

“But ultimately, I know that I have done my job, if I see that they enjoyed our session,” she added.

According to Karen, they are targeting sales of 2,000 bags for this month. So far, they have sold more than 200, mostly to online buyers.

“We sell and market the bags through the Facebook page of the Differently Special Achievers Movement and it has been well-received, not only here in the Philippines but also in other parts of the world,” she said.

On the group’s Facebook page, people are encouraged to take a “selfie” with the bag and post it on the page along with a message for the two boys.

One of those who did so was Anf Al-Shatari, Iraq’s national representative for OPEC’s Economic Council Board at Oil Marketing Co., who shared a photo of himself with Miguel’s bag. According to the NGO, he was one of the first persons to express support for the project.

Karen said that the Differently Special Achievers Movement together with the TW Community Enablers Inc. would continue to design programs for children with special needs to help them excel in the things they are good at.

“We want to feature these kids and tell the world that these are children with special needs but they are achievers in their own way,” Shiela added.