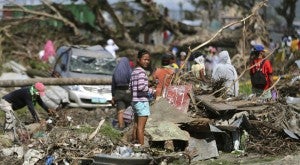 In the latest National Disaster Risk Reduction and Management Council report, 6,033 were recorded dead as one of the most powerful typhoons battered provinces in Visayas.

As of 6 a.m. Saturday, 27,468 were recorded as injured while 1,779 are still missing.
Of the 6,033 dead, more than half came from Eastern Visayas region, where Leyte and Samar bore the brunt of the destructive typhoon.

Meanwhile, the total cost of damages remained at P35 billion with P18 billion worth of damages in infrastructures and P17 billion in agriculture.