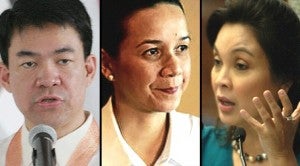 Sen. Aquilino Pimentel III, chair of the Senate committee on justice and foreign affairs, said on Friday he would immediately call for a Senate investigation into the series of media killings.

Pimentel condemned the continued and worsening attacks against journalists, citing the three killings of media professionals over the past 12 days in Mindanao.

The lawmaker, who hails from Mindanao, made the announcement following news of the death of radio commentator Rogelio Butalid, who was shot dead as he stepped out of a radio station in Tagum City on Wednesday.

“The nonstop killings of known media personalities are obviously work-related, noting that the victims are popular among their listeners because of their exposés against corruption and other illegal activities in their areas,” Pimentel said in a statement.

Pimentel said another radio reporter, Jonavin Vilalba, survived an attack in Iloilo City after he was fired upon by unidentified men while opening the gate of his house in Jaro district.

Vilalba was hit on the right ankle and left foot.

Pimentel called on the police to step up its campaign against criminals and “to work extra hard to arrest the suspects and find out who are the real masterminds behind the series of killings in Mindanao.”

Pimentel noted the report of the New York-based Committee to Protect Journalists which counted 72 journalists killed in the country since 1992, making the Philippines the third worst in CPJ’s impunity index.

Senators Grace Poe and Loren Legarda earlier blamed the slow pace of justice for the alleged culture of impunity against journalists in the country.

“I think that the only way you can deter the killings is by making sure that justice is carried out in a timely manner.  It takes years before a suspect is caught and brought to trial,” said Poe, the chair of the Senate committee on public information and mass media.

“Criminals are emboldened because hardly any suspected media killers are actually sentenced and thrown in jail,” Poe added in a text message on Thursday. Poe said much more needs to be done to hasten the process.

“I think that we need to unburden our courts and add justices, PAO [Public Attorneys’ Office] lawyers … the DILG [Department of Interior and Local Government] should also push through with its plan to hire additional police officers by 2014,” Poe said.

Legarda, a longtime broadcast journalist before becoming a senator, blamed the incidence of “vindictive politics” in certain areas of the country.

“The personalistic and vindictive politics prevalent in some areas also breed this kind of culture which is totally unacceptable in a civilized and humane society,” Legarda added.