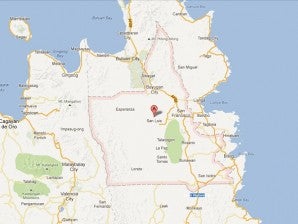 TAGUM CITY, Davao del Norte—Government security forces have seized what the authorities described as a major bomb factory of the New People’s Army in Agusan del Sur and hauled away more than 160 landmines, the military reported Friday.

Capt. Alberto Caber, spokesperson of the Eastern Mindanao Command based in Davao City, said in a telephone interview that the soldiers also found other bomb components in the facility, which was located in a remote area of the municipality of Loreto town on Wednesday.

Caber described the seizure as one of the military’s biggest accomplishments against communist rebels this year.

He said the bomb haul alone was large enough to kill or injure thousands of people or raze a city if detonated at once.

“We believe these improvised bombs were being distributed to NPA units in Mindanao and used in committing atrocities against government troops and civilians,” Caber told the Inquirer. “So far, this confiscation is the largest, maybe even in the entire country.”

He said the seizure of the bomb factory was made with the cooperation of some civilians.

“We have identified rebel leaders and persons who are behind these land mines, and in the coming days we would be taking the proper actions,” Caber said.

He said 128 civilians, soldiers and policemen have been killed in  453 land mine incidents since 2010. More than 320 people were wounded in those attacks, Cruz said.

“This is the biggest NPA landmine factory discovered so far,” he said.