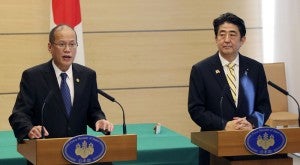 TOKYO—President Aquino received an honorary doctorate degree from Sophia University on Friday, the third Philippine leader to be conferred such an honorary title from the Jesuit-run institution.

Sophia University President Tadashi Takizawa bestowed the honorary degree of  Doctor of Laws on the Filipino leader in morning ceremony witnessed by the university’s chancellor, Toshiaki Koso, and other school officials.

About 150 guests from the government, business sector, diplomatic corps, members of the Filipino community, and Filipino exchange students were in attendance.

Both Koso and Takizawa paid a courtesy call on Mr. Aquino before the confernment ceremony.

Mr. Aquino’s honorary degree was the third conferred by Sophia University on an outstanding Filipino. The two others were given to the Jesuit historian Horacio de la Costa in1973 and Carlos P. Romulo 1963 when he was president of the University of the Philippines.

Frriday’s conferment ceremony coincided with this year’s centennial anniversary celebration of the university, which was  founded in 1913.

The Jesuit university has the same motto as Ateneo de Manila: “Men and Women for Others, with Others.”

The conferment of the honorary degree on the President was proposed by Fr. Ramon T. Villarin, SJ, the Ateneo president, in a letter to Sophia University on Jan. 21, 2013.

The President was honored by Sophia University “for his significant achievements in the promotion of good governance and peace in the Philippines, which have contributed to the remarkable economic development of the country in recent years,” the citation read.

Mr. Aquino highlighted his Ateneo roots in his acceptance speech, which was called a  “commemorative lecture.”

“As an heir of a younger generation, both as a product of a Jesuit education and as a Filipino,  I am heir to (De la Costa’s) example. I am duty-bound to continue where (he) left off, helping my country tread the path towards social justice and economic process–pursuing not merely growth, but inclusive growth,” said the President.

“I remember the Japanese showing great synpathy and suppprt for my father as he made his last voyage home in 1983, before he was britally assassinated,” recalled the President.

He said Japan was also one of the first countries to recognize his mother’s government, the first Aquino presidency, in 1986.

The President also pointed out that both nations have been helping each other in difficult times.

“Our countries never fail to help each other… during times of disaster,” said Mr. Aquino.

He said he was “happy to report” that the Filipino people’s insistence on good governance was paying off.

“Where there was once apathy and helplessness, there is now a confidence built on measurable improvements.  There is a palpable optimism among our people, among the international community,” he said.

Noting that the Latin phrase  “Lux Veritatis” on the Sophia University seal means “Light of Truth,” Aquino said, “All of us … must strive to be bearers of light in the darkest moments of our fellowmen, offering the illumination of comfort and company.”

“But if we are to truly live in the light, it requires of all of us not just courage but humility—the kind that fosters truth; that allows us to remember that we are all pilgrims—weak, fallible and vulnerable—who can reach out to each other to transform our individual weaknesses into an indomitable, unified strength,” he added.

The President is in Japan for the 40th Association of Southeast Asian Nations (Asean)-Japan Commemorative Summit.