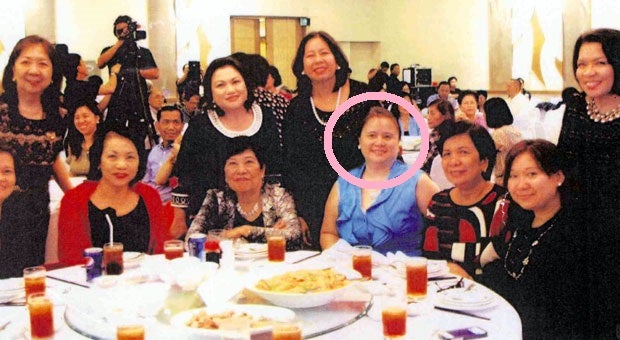 A Supreme Court insider has identified the so-called “Ma’am Arlene” who was earlier described as “the Janet Lim-Napoles of the judiciary” for allegedly influencing court decisions in favor of her clients with huge payoffs to judges and justices.

The source said the alleged “decision-broker” in the judiciary was none other than Arlene Angeles Lerma.

Lerma is known to most of members of the judiciary, according to the Inquirer source who asked not to be identified for lack of authority to speak to the media.

The media earlier reported that there were three Arlenes who showered members of the judiciary with gifts and cash.

The source was among those called by the Supreme Court committee under Associate Justice Marvic Leonen investigating corruption in the judiciary.

“We know her because she also attends parties for retired judges and events, but she is not a member of the judiciary,” the source said.

The Supreme Court insider said he overheard Lerma in one party for members of the Philippine Judges Association (PJA) saying “Iniwan ko na yung pang raffle (I left something for the raffle).”

RTC judges and Court of Appeals justices are known to issue temporary restraining orders (TRO) that adversely affect or benefit litigants. There are reports that these TROs can be bought.

The source confirmed that the photo obtained by Inquirer was taken at the retirement party of Eugenio last year.

“The party was attended by judges and DCAs and she (Lerma) was there,” he said.

He said Lerma was a strong supporter of Eugenio who served as a two-time PJA president when he was a regional trial court judge.

Lerma’s name cropped up as the “influential person” during the recent election for PJA president in October.

Lerma allegedly bankrolled the election of PJA officers and held parties for members of the judiciary.

Supreme Court Administrator Midas Marquez, who conducted an initial investigation of the alleged vote-buying in the PJA election, earlier said he had asked the three candidates vying for the leadership of the PJA to explain allegations of irregularities during the election.

The PJA candidates for president were Judge Ralph Lee of Quezon City (who won the presidency), Judge Rommel Baybay of Makati City and Judge Felix Reyes of Marikina City.

Arlene reportedly booked 50 rooms in a high-class hotel for the judges and their spouses during the election and gave expensive bags and trips overseas as gifts.

Marquez has issued a circular reminding judges to conduct themselves properly during PJA elections and listed prohibited acts.

Domagoso acknowledged that he knew Lerma, a godmother of one of his children.

“I never denied it. She’s my friend. She’s my neighbor in Balut, Tondo,” the vice mayor told the Inquirer in a phone interview.

Asked if he went with her to a party of the PJA, he said, “many times.”

He said he knew Lerma as an “ordinary, simple woman” who is a sister of a barangay chair.

“She has no business. She’s employed in a company,” Domagoso said.

He couldn’t recall her specific job and company.

Asked if he was aware of the alleged case-fixing activities of Lerma, Domagoso said, “As far as I’m concerned, I don’t know that’s she’s into [case] fixing. I have a high respect for the members of the judiciary. I don’t think that is happening nowadays.”

Lerma has been likened to Napoles, the alleged mastermind behind the P10-billion pork barrel scam. Napoles, along with Senators Juan Ponce Enrile, Jinggoy Estrada and Bong Revilla, and other lawmakers, has been charged with plunder and malversation in the Office of the Ombudsman for allegedly pocketing millions of pesos from the Priority Development Assistance Fund, a pork barrel.