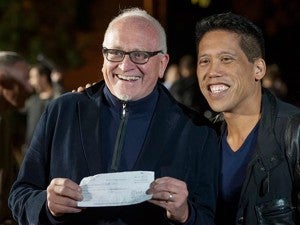 David Gibson (left) and Rich Kiamco ( right) of Jersey City display their marriage license, which they obtained during a rally on the lawn in front of Garden State Equality. AP

NEW DELHI—A colonial-era law criminalizing homosexuality will remain in effect in India, a top court said Wednesday, dealing a blow to gay activists who have argued for years for the chance to live openly in India’s deeply conservative society.

The Supreme Court threw out a 2009 New Delhi High Court decision that struck down the law as unconstitutional, saying it was for lawmakers—and not the courts—to decide the matter.

After the ruling was issued, dozens of activists outside the court started crying and hugging each other in consolation.

“This is a very sad day for us, we are back to square one in our fight for the democratic rights of the gay community,” said Ashok Row Kavi of the activist group Humsafar Trust.

Lawyers and supporters for gays, lesbians and transsexuals vowed to continue pressing for the removal of a law that they say encourages police harassment, even if it is rarely invoked by prosecutors.

“We feel very let down,” lawyer Anand Grover said. “But our fight is not over and we will continue to fight for the constitutional right.”

Grover, who had argued the case, said the Supreme Court’s decision was “not correct in law.”

Grover said the non-governmental organization NAZ Foundation that had taken up the matter in the court, would file a petition for a review of the top court’s decision.

The 2009 high court ruling had outraged conservative religious groups, who argued in an appeal that gay sex was unnatural and India should maintain the law, dating back to the 1860s when Britain ruled over South Asia.

The law states that “whoever voluntarily has carnal intercourse against the order of nature with any man, woman or animal” can be punished by up to 10 years in prison.

In a rare alliance, representatives of different religious groups , including the All India Muslim Law Board, Christian and church groups, and Hindu spiritual leaders, had come together to challenge the high court’s order.

The order had said that treating consensual gay sex between adults as a crime was a violation of fundamental rights protected by India’s constitution.

While prosecutions were rare, the law was used frequently by the police to harass people and elicit bribes.

The government says there are about 2.5 million gays in India.

Over the last decade, homosexuals have slowly gained a degree of acceptance in some parts of India, especially its big cities. The last few years have also seen large gay pride parades in New Delhi and other big cities, including Mumbai and Kolkata.

Still, being gay remains deeply taboo in most of the country, and many gays and lesbians hide their sexual orientation from friends and relatives.