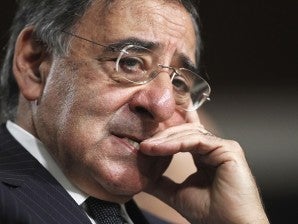 In this June 9, 2011 file photo, then-CIA Director nominee Leon Panetta testifies on Capitol Hill in Washington. Several weeks after overseeing the raid that killed Osama bin Laden, then-CIA Director Leon Panetta violated security rules by revealed the name of the raid commander in a speech attended by the writer of the film “Zero Dark Thirty,” according to a draft report by Pentagon investigators. The unpublished report was first disclosed by the Project on Government Oversight and confirmed Wednesday by Rep. Peter King, who requested the probe nearly two years ago. AP/Manuel Balce Ceneta

Panetta said through a spokesman that he didn’t know Boal was in the room.

Judicial Watch, a conservative group, filed a request for the more than 200 pages of documents, which the CIA released Tuesday (Washington time). The documents concerned the internal investigation of its role in the film about the bin Laden raid.

“I had no idea that individual was in the audience,” Panetta said in a statement. “To this day, I wouldn’t know him if he walked into the room.” Panetta spokesman Jeremy Bash said Panetta assumed everyone in the audience had the proper clearance to hear the speech.

The documents refer to Panetta revealing the name of the ground commander of the unit that carried out the raid.

Parts of the speech transcript released in the documents Tuesday are still blacked out.

Only 1 killed in bin Laden raid was armed