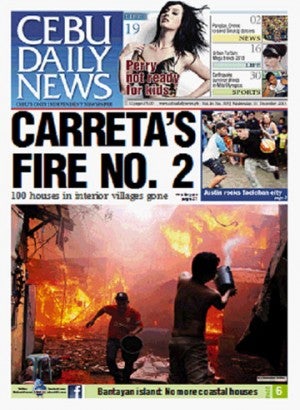 Housewife Joy Torregoso was watching a video at home when she saw flames in the upper floor window past 3 p.m. yesterday.

She jumped to her feet as neighbors started shouting “Sunog!” (fire).

She ran down a burning staircase, unable to save a single belonging in sitio Laray, barangay Caretta in Cebu City.

Fire swept through at least 100 houses in barangay Carreta and Tejero, destroying residential buildings of wood and light materials.

It was the second fire in four months to hit barangay Carreta, this time causing wider damage in a congested neighborhood with narrow roads.

About 2,000 individuals were evacuated to the sports complex of each barangay.

The fire was reported at 3:26 p.m. and appeared to have started in a small bakery near Torregoso’s house but the actual cause is still being investigated, said Fire Chief Inspector Rogelio Bongabong Jr.

It took more than an hour to control the blaze in sitios Laray and Caimito in barangay Carreta, where the damage was concentrated. Fewer houses were hit in sitio Tierra Kura in barangay Tejero.

Traffic was tied up on General Maxilom Avenue and MJ Cuenco Avenue.

The fire started behind the Halfway House of the Department of Social Welfare and Development (DSWD) regional office and spread to the houses near Doña Pepang Cemetery up to the boundary of barangay Tejero.

Carreta barangay firetrucks responded to the first alarm but were not adequate. Hoses were linked up with other hoses to reach burning houses in the interior of the village. Reinforcements had to be called in from Talisay City and Liloan town.

Torregosa, a mother of three, ran down a staircase already being eaten up in flames. She stumbled on newly washed clothes earlier hung in the room.

(I was alarmed to see the window on fire. I immediately went down but the flames were already going up the stairs.)

If not for the wet laundry wrapped around, she said, she would have suffered worse injuries in her feet and left arm, which had minor burns.

The mother found her two other children who had dashed out from the Carreta Elementary School. Together, the family sat on the street curb across the bakery, crying as they watched the rest of their house burn down.

Most of her relatives live in the same barangay, also fire victims.

Cebu City Vice Mayor Edgardo Labella, who rushed to the scene with Mayor Michael Rama, said authorities would reblock the burned area as soon as possible. The move was supported by Carreta barangay captain, Eduardo Lauron so that wider paths would be set up to make it easier for firetrucks to enter.

Labella said both barangays are declared under a state of calamity which allows them to release calamity funds for immediate use.

“Both of them took advantage of the commotion. They may actually be from neighboring areas, said Chief Inspector Wildemar Tiu of the Waterfront Police Station.

Tiu said he would field police at the fire site to prevent a repetition.

Bakery owner Gaudenzia Barda denied reports that her building was the source of the fire and used illegally tapped electricity to cope with heavy power consumption.

“I heard that there were children playing with firecrackers and that matches were found at the corner near the store,” Barda told Cebu Daily News, identifying grandchildren of boarders next door.

Gaudenzia said she and her 78-year-old mother Hermogina were on a jeepney riding home from Carbon when they saw the smoke rising from afar. They quickly walked the rest of the way to the house.