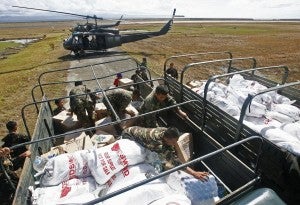 MANILA, Philippines – The Department of Social Welfare and Development (DSWD) has vowed to investigate allegations of missing or stolen relief goods from private donors, following media exposés of food packs being sold in stores and online sites.

The Philippine Information Agency (PIA) said DSWD officer-in-charge for Eastern Visayas Nestor Ramos will clarify the matter with their workers on the ground.

“The reality on the ground is there are NGOs (non-government organizations) directly distributing relief goods to LGUs (local government units)… In every municipality, we have already deployed (teams) to assess whether commodities are being received by our people in the villages,” Ramos said in the statement Tuesday.

He said “they have not yet received information regarding the matter” but will nevertheless have it probed.

Earlier, media reported that US military Meals-Ready-to-Eat (MREs) were being sold in Metro Manila stores at P220 each. MREs were included in the packages sent by US Agency for International Development (USAID) for the victims of Supertyphoon “Yolanda.”

The PIA said there were also allegations that corrupt local officials were hoarding imported relief goods, swapping them with local relief packs “hidden inside cadaver bags.”

Ramos explained that they only make an inventory of the boxes and not the contents. He said media may also visit their relief hubs to verify the reports.

“Usually, when there are donations from the international organizations, we just make an inventory of it by box, but we are not opening that box. We immediately dispatch them to the different municipalities. We have a list of distribution plan as to who will be given priority. We do not repack (these relief goods) in our offices,” Ramos said.

Palace: Cops must stop sale of US ready-to-eat meals