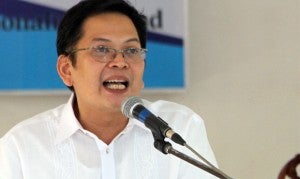 MANILA, Philippines—His being named office in charge of the Bureau of Customs (BOC) is proof that God has a “sense of humor,” said Finance Undersecretary for Privatization John Philip “Sunny” Sevilla, who also thanked the Almighty for his new job.

“I still don’t fully understand why I was appointed Customs OIC… Now I’m sure that God has a sense of humor,” the former executive director of the investment bank Goldman Sachs said during his first working day at the BOC on Monday.

Sevilla thanked President Aquino “for his trust” and said that being told about his new job was “like being hit by lightning.”

In a news conference, he said he would be Customs OIC for only two months and the President did not give him any marching orders except for telling him “to do (his) best.”

Sevilla said he would focus on “Customs processes, mainly maximizing technology use and minimizing human intervention,” but added that the reforms introduced by former Commissioner Ruffy Biazon could not be completed in only 60 days.

“Reforms will succeed or fail not because of the big overall program but with the execution of small details… I’m more interested in the future,” he said.

Finance Secretary Cesar Purisima, who graced the BOC turnover, earlier said Sevilla’s financial expertise and track record in public service made him more than capable of continuing the reform agenda at the BOC.

In a statement, Purisima said the Department of Finance was “in full support of the President’s decision to tap Undersecretary Sevilla for the job.”

Sevilla urged BOC officials and employees to “think of the welfare of the entire nation” and to “remember that receiving even a single peso of tara (dirty money from Customs stakeholders) is corruption.”Jerry E. Esplanada