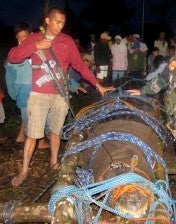 SAY HELLO TO ‘LOLONG.’ In this photo taken Sunday, Sept. 4, 2011, a Philippine National Police officer stands next a giant saltwater crocodile which was captured by residents and crocodile farm staff along a creek in Bunawan township, Agusan Del Sur province in southern Philippines late Saturday. Mayor Cox Elorde of Bunawan said that dozens of villagers and experts ensnared the 21-foot (6.4-meter) male crocodile along a creek in his township after a three-week hunt. It was one of the largest crocodiles to be captured alive in the Philippines in recent years. (AP Photo)

Butuan City—After capturing what could be the biggest crocodile caught alive in the world, hunters are already talking of going after an even bigger croc, possibly lurking in the creeks of Agusan del Sur.

The monster, 6.1-meter (20-foot) saltwater crocodile ensnared on Saturday in Bunawan town after a 24-day hunt has already been named “Lolong” by the villagers—and experts say Lolong may not be alone.

Wildlife official Ronnie Sumiller, who has hunted “nuisance crocodiles” for 20 years and led the team behind the weekend capture in Bunawan, said a search was under way for a possibly larger crocodile that he and the villagers have seen roaming in the farming town’s marshy outskirts.

“There is a bigger one and it could be the one creating problems,” Sumiller told The Associated Press by telephone from Bunawan.

The captured crocodile has been named after Ernesto “Lolong” Conate, a Palawan-based hunter hired to help catch it.

But Conate died of a stroke a few days ago while working out the plans for capturing the beast, which was eventually caught by a team of crocodile experts and villagers near Lake Mihaba, one of the several lakes crisscrossing Agusan Marsh, the country’s largest marshland.

Josefina de Leon, wildlife division chief of the Department of Environment and Natural Resources, said the beast was likely the biggest crocodile ever captured anywhere in the world.

“Based on existing records the largest that had been captured previously was 5.48 meters (18 feet) long,” she told Agence France-Presse.

The Philippine specimen would easily dwarf the largest captive saltwater crocodile, which the Guinness World Records website lists as Cassius, a 5.48-meter male which lives at an Australian nature park.

Press reports also describe other huge crocs including a 6.2-meter adult male killed in Papua New Guinea in 1982 that was measured after it was skinned.

The hunt was launched after a local fisherman went missing near a marshy creek early last month and after a reported crocodile attack on a carabao.

Villagers also claimed that a crocodile attacked and killed a 12-year-old girl, identified as Rowena Romano, in the same waters on March 7, 2009.

Mundita Lim, director of the Protected Areas and Wildlife Bureau (PAWB), said the reptile weighed 1,075 kilograms and its body was one meter (3.3 feet) wide.

The PAWB has yet to have an estimate of the animal’s age.

“The community was relieved,” Sumiller said of the capture, but added: “We’re not really sure if this is the man-eater, because there have been other sightings of other crocodiles in the area.”

The local government of the impoverished town of 37,000 people has decided against putting down the reptile, and will instead build a nature park where it will go on display.

The Bunawan hunting team, employed by a government-run crocodile breeding farm, began laying bait using chicken, pork and dog meat on Aug. 15 in an attempt to snare the beast.

But the reptile simply bit off both the meat and the line it was skewered on.

A heavy metal cable finally proved beyond the power of its jaws, and the beast was subdued in a creek late Saturday with the help of about 30 local men. 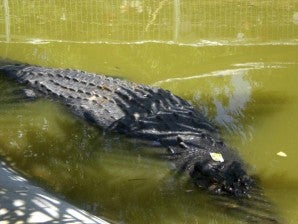 TOURIST ATTRACTION. The 6.1-meter (20-foot) saltwater crocodile, now named "Lolong," weighing 1,075 kilograms (2,370 pounds), was the biggest to be caught alive in the Philippines in recent years. Wildlife officials were trying to confirm whether it was the largest such catch in the world, said Theresa Mundita Lim of the government's Protected Areas and Wildlife Bureau. (AP Photo)

Beyond the mark of the hook inside its upper jaw, the crocodile did not appear to have sustained any serious injuries.

Bunawan Mayor Cox Elorde said that Lolong  would become the star of the planned ecotourism and conservation park near the Agusan Marsh.

“We will take advantage of this crocodile as a tourism attraction and we hope it will help us generate income and jobs,” Elorde told the Inquirer by phone.

He said the people of Bunawan believed Lolong was not the only large crocodile lurking in the 113,910-hectare Agusan Marsh, which straddles several towns.

But Elorde disagreed with statements by PAWB officials that more searches for crocodiles would be launched. He said there was no more hunt for crocodiles in his town.

Lolong, believed by some residents to be 50 years old, is now kept in a huge metal cage.

“We are eyeing a Guinness Record for Lolong,” Elorde said.

Relieved villagers in Bunawan threw a fiesta to celebrate the capture of the crocodile, which had to be pulled by rope by about 100 people from the creek to a clearing, where a crane lifted it onto a truck.

“It was like a feast, so many villagers turned up,”  Elorde said.

“The villagers were saying 10 percent of their fear was gone because of the first capture,” Sumiller said. “But there is still the other 90 percent to take care of.”

Philippine laws strictly prohibit civilians from killing endangered crocodiles, with violators facing up to 12 years in prison and a fine of P1 million.

The world’s most endangered freshwater variety, Crocodylus Mindorensis, is found only in the Philippines, where only about 250 are known to be in the wild.

About 1,000 of the larger saltwater type, or Crocodylus Porosus, like the one captured in Bunawan, are scattered mostly in the country’s southern swamplands, wildlife official Glen Rebong said.

Crocodiles have been hunted in the country by poachers hoping to cash in on the high demand in wealthy Asian countries for their skin, which is coveted for vanity products ranging from bags to cell phone cases.  Reports from Franklin A. Caliguid, Inquirer Mindanao; Kristine L. Alave in Manila, AP and AFP