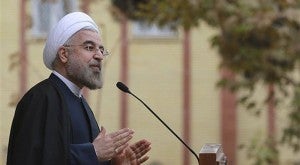 TEHRAN, Iran—Iran’s President Hassan Rouhani said Sunday that the last month’s nuclear deal with world powers has already had a positive impact on the country’s economy.

Rouhani spoke Sunday while presenting next year’s budget to parliament. He told an open session of parliament that, after the “success” of the talks, investors were gravitating to businesses and the stock exchange. State TV broadcast his speech.

“Economic activities have been shifted to the stock exchange from gold, hard currency and real estate,” said Rouhani.

The nuclear deal eases some sanctions in return for a halt to parts of Iran’s uranium enrichment program.

Western sanctions over the country’s suspect nuclear program last year dealt a heavy blow to the economy, especially the currency.

The $68 billion budget predicts an American dollar set to 26,000 Iranian rials. The rial is currently 29,000 to the dollar. Parliament will decide on the budget within months.

He said the budget will decrease the inflation rate, a major priority of the government. Inflation currently stands at about 40 percent but Rouhani said last week he hopes to reduce it to 25 percent by March 2015.