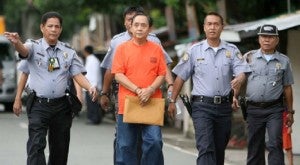 Coloma said over state-run radio dzRB that Aquino was going to order an investigation on the details surrounding Leviste’s parole and release from jail.

“’I am not happy with the decision and I’m having the whole matter investigated,” Coloma quoted the President.

Coloma said the President wanted to know the “entire background” of the parole decision.

Leviste was freed on parole on Friday following the approval of his parole application for serving the minimum term of his prison sentence. He was convicted in 2009 by the Makati regional trial court for the murder of his long-time aide Rafael de las Alas on January 12, 2007.

Dante Jimenez of the Volunteers Against Crime and Corruption earlier criticized the parole, saying Leviste was accorded “VIP treatment.”

Two years ago, the Bureau of Corrections (BuCor) was rocked by a scandal after Leviste was found by National Bureau of Investigation agents at his office in Makati. It led to the resignation of bureau chief Ernesto Diokno and uncovered a program called “living out” clearance within the New Bilibid Prisons allowing convicts already in medium or minimum security to stay in huts within the prison compound.

But a Makati court later dropped charges of evasion of sentence filed by the BuCor against Leviste, said Prison Supt. Venancio Tesoro. With a report from Christian V. Esguerra, Philippine Daily Inquirer