Used Porsches, BMWs back in Cagayan 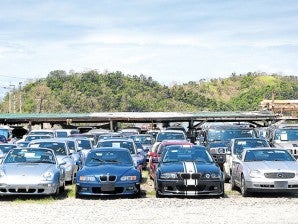 SANTA ANA, Cagayan—The trade of used vehicles has started to gain momentum at the Cagayan Special Economic Zone and Freeport (CSEZF) as people looking for cheaper vehicles have been trooping to the auto yard in Casambalangan village here, two months since a 2008 ban on car importation in the free port has been lifted by the Court of Appeals (CA).

Julian Jovy Gonzales, CSEZF officer in charge, said the five locators (sublicensees) occupying the 5-hectare car lot have begun replenishing their stocks of used cars mostly from Japan and Korea, with a monthly average of two shipments of at least 250 cars arriving at Port Irene here.

Among the vehicles sold here are expensive subcompact coupés and sedans, sport utility vehicles and buses. These include Hummers, Porsches and BMWs.

“We were told [by traders] that business has been going back to normal. We hope that more people would be coming over to have a look at the new stocks here,” said Gonzales.

Of this number, 903 units were imported from Japan, while 576, including 82 buses, came from Korea.

When the Inquirer visited the car lot on Saturday, workers were busy refurbishing and polishing the imported cars, some of which bore tags as either sold or reserved.

“We give assurance that these imported vehicles are ‘tsunami-free,’” Gonzales said, referring to the March 2011 tsunami that hit cities along Japan’s eastern coastline, sweeping away and destroying cars, ships and buildings.

Right-hand drive vehicles from Japan need to be converted to left-hand drive to meet Land Transportation Office (LTO) requirements in the Philippines, businessmen in the zone said.

With Filipino mechanics’ ingenuity, the conversion cannot be readily seen when vehicles leave the compound, Inquirer sources in the zone said. They said these used vehicles can easily be passed off as brand new. Among the bestsellers, sources said, are vans and minivans, including older models of the Korean-made Hyundai Starex, which reportedly sell for about P450,000 each.

At the compound of New Apollo CSEZA Inc., the most eye-catching units were sports cars that include Porsches, Mercedes-Benzes, BMWs and Volkswagen Beetle convertibles. Five H2 Hummers were also in stock.

“We are starting to receive the same types of customers like before—middle-class businessmen and farmers who want quality but affordable second-hand vehicles,” Sylvia Geroue, New Apollo manager, said.

New Apollo is one of the car trading companies that were given licenses by Forerunner Multi Resources Inc., the main licensee for car importation operations at CSEZF.

In July 2008, used car trade here stopped after the Supreme Court affirmed the legality of Executive Order No. 156, issued by then President Gloria Macapagal-Arroyo in December 2002.

Forerunner questioned the application on the Cagayan Economic Zone Authority (Ceza) of EO 156, which bans used car importation in the Philippines.

It would normally take 30 days for an imported used vehicle to undergo processing of its registration requirements until it is ready for use by its new owners in the Philippines, Iloy said.

The process starts as soon as shipments arrive at Port Irene, when a team composed of “boarding parties” from the Bureau of Customs (BOC), Bureau of Immigration, Philippine Coast Guard, Ceza, Forerunner and quarantine officials inspect the contents of cargo ships before off-loading.

The BOC examines the vehicles for tariff duties that must be paid by the importer to the government. Once taxes are paid, the vehicles are displayed at the auto yard while undergoing the usual refurbishing.

The importer then files an application and pays for registration of the vehicles with the LTO, which, in turn, checks the units for road-worthiness and eventually issues the registration documents and a license plate.

“Once all LTO documents are processed, BOC, Ceza and Forerunner approve the gate pass for the vehicles, ready for purchase and driven out of the free port,” Iloy said.