For Luna stone pickers, the burden gets heavier 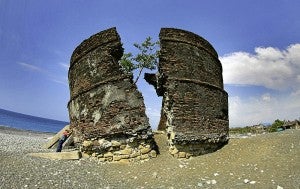 WATCHTOWER The Baluarte, a Spanish-era watchtower, is Luna’s most famous landmark. EV ESPIRITU

LUNA, La Union—Sixty-seven-year-old Ester Camat, a pebble picker of Barangay Nalvo Norte in Luna, La Union, chuckles when asked what she wanted to become when she was a child.

Camat once dreamed of becoming a teacher, but she had to give that up when her parents died in a road accident when she was 8.

To this day, she has combed the shores of Luna for hours, plowing her bare hands into the blanket of stones for fine pebbles that are widely believed to be gifts from Luna’s patroness, the Lady of Namacpacan.

Camat started her toil in the late 1950s when a businessman from out of town asked some residents to pick stones for him. Then 17, she joined a handful of people in gathering white, flat stones that the man bought at P2 a bucket.

At first, she was not too keen about the job. The thought of spending long hours on the beach and lugging sack after sack of pebbles under the sweltering heat discouraged her. But she needed money, so she just went with it.

“If I had a choice, I would not have gone pebble picking because it was tough work. But I had to because I needed to make a living and with pebble picking, I didn’t need anything but physical strength,” she says.

Camat is the only pebble picker in her family. If there are not too many pebbles on the beach, which is often the case when the waves are moderate, she helps her husband till the land that her sister leased to her, tend their livestock, and cut firewood.

Most Luna residents juggle these jobs throughout the year.

Even children are part of the routine. Besides helping their parents pick pebbles, they fill liquor bottles with “seven-colors stones” that are gray when dry but display assorted colors when soaked in water.

They sell these to tourists visiting the Baluarte (watchtower) in Barangay Victoria in Luna to earn school money. 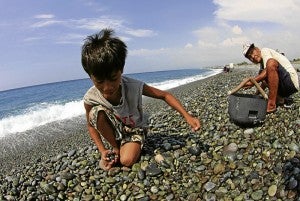 PRECIOUS STONES Young and old residents of Luna, La Union, comb the town’s beach in search of pebbles and stones that they sell to traders and exporters. EV ESPIRITU

Luna’s beach has over 30 kinds of decorative stones. Chiseled to perfection by the Amburayan River and the West Philippine Sea (South China Sea), the pebbles often have clean contours and smooth surfaces, and come in a variety of shapes. Most look like misshapen triangles with blunt edges, some flat and broad, and others long and narrow or shaped like eggs.

The sizes of the pebbles are equally varied. Some are as tiny as peas, while others are as big as rugby balls. The smaller a pebble and the rarer it is, the more expensive it gets, pickers say.

Gray, white and “seven-color” stones are not as common, but these cost the same as black stones. Green and tiger stones, and marble are hard to come by so they could fetch as high as P70 to P100 a bucket.

Pickers sell their pebbles to checkers who, in turn, sell these at higher prices to 29 local traders and four exporters. They bring the pebbles to Metro Manila for shipment to various areas in the country, particularly in Bulacan and Pampanga. Some find their way to Malaysia, Hawaii, Singapore, Korea and Switzerland.

Camat says pickers have tried asking traders and exporters to increase the buying price of stones because there never was one for a long time. But traders would tell them that they cannot because they spend a lot on container and shipping fees, which could easily reach P15,000 per trip.

The provincial government, which oversees most of the operation, only allows pickers to collect pebbles that are between 10 mm and 100 mm in diameter. Collecting smaller pebbles would require the use of tools that would hasten the depletion of supply while larger stones are natural “sand weights” that prevent the ground from eroding.

The heaps of pebbles found on the shores act as natural barricades against storm surges. Without them, the town would be in great risk of massive flooding.

To keep the natural environment, Roel Collado, an engineer at the Mines and Geosciences Bureau (MGB), says the amount of pebbles gathered should never exceed the rate at which the sea replenishes the supply.

In this regard, the provincial government has asked pebble pickers to use only their hands and avoid using shovels or any other tool to prevent large-scale extraction.

The pickers are also required to hand-carry the stones they collect. Using carts, wheelbarrows and other mechanical equipment has been banned.