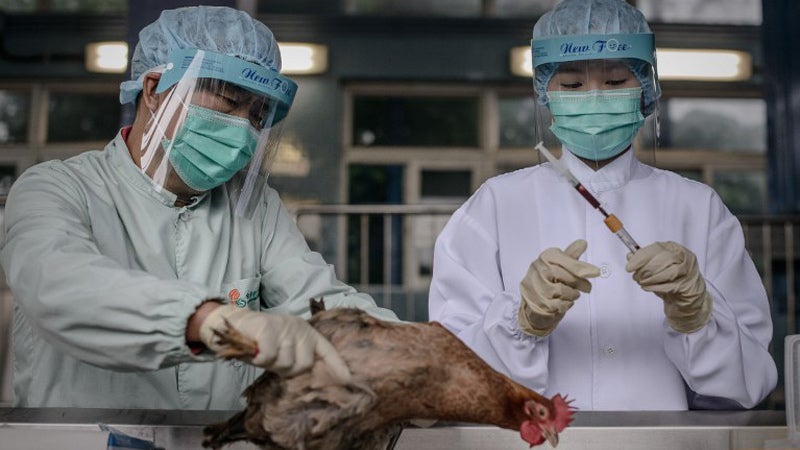 In this file picture taken on April 11, 2013 officials test poultry at the border with mainland China in Hong Kong as part of measures against the spread of the deadly H7N9 bird flu. Hong Kong on December 2, 2013 confirmed its first human case of the deadly H7N9 bird flu, according to the broadcaster RTHK, in the latest sign of the virus spreading beyond mainland China. AFP PHOTO /FILES/ Philippe Lopez

The Health Department said late Friday that an 80-year-old man being treated for a chronic illness in the hospital was found to have the bird flu strain.

Authorities in the Asian financial and transport hub have been monitoring H7N9 closely since it was first identified in April. Infectious diseases are a particular concern in Hong Kong, where a decade ago the Sars virus killed 299 people. Hundreds in other countries also died.

H7N9 has sickened about 140 people and killed 45, almost all of them in mainland China. Taiwan has had one case.

The virus appears to have stalled since Chinese authorities cracked down on live animal markets following the initial outbreak. Medical authorities say it doesn’t appear to be easily contagious between humans.

Health officials said that the second patient lived in Shenzhen, the mainland Chinese city across the border from Hong Kong, and sought treatment in the hospital. Authorities were looking for people who may have been in contact with him, including relatives, hospital staff and the taxi driver who brought him to the hospital.

Officials have stepped up border checks and raised the alert level after the first case, an Indonesian maid, was reported on Monday.