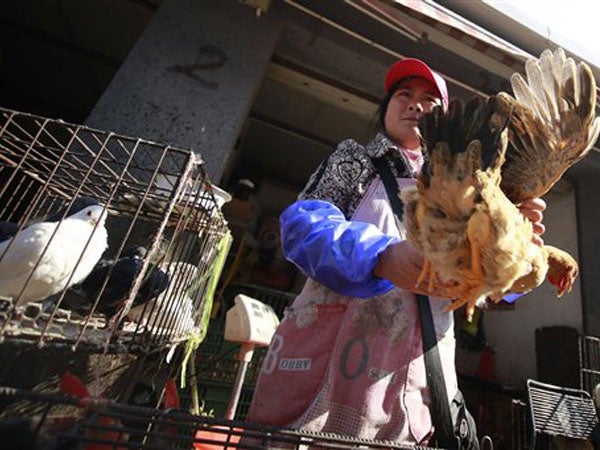 A vender holds a chicken at a chicken whole sale market in this Tuesday April 2, 2013 file photo in Shanghai, China. Chinese scientists have found the strongest evidence yet that a newbird flu strain is sometimes able to spread from person to person, but they are emphasizing that the virus still does not transmit easily. AP

The 51-year-old woman is in a critical condition after she was admitted to hospital on August 3 following signs of a fever, the Guangdong Provincial Health Department said on Saturday.

“She was a poultry slaughtering worker at a local marketplace,” the local health bureau said in a statement on its website.

A total of 134 cases have now been reported on the Chinese mainland, including the Guangdong case.

State news agency Xinhua said Saturday that 44 people had died of the disease — which includes a recent fatality following the release of the latest official figures a month ago.

The virus was first reported in late March, with most cases confined to eastern China, and only one reported outside the mainland, in Taiwan.

However, they told people to “not panic” as the virus’s transmissibility remained “limited and non-sustainable”.

Local health authorities Saturday lifted medical observations on 54 of 96 people who were placed under monitoring after they had close contact with the Guangdong patient, Xinhua said.

The patient had worked in markets in Boluo, which is about 129 kilometers (80 miles) east of the provincial capital Guangzhou.

Many of those infected with the virus had direct contact with birds, commonly at poultry markets, which have been closed by officials across China to halt the spread of the disease.

Cases of H7N9 have dropped significantly in recent weeks.

In the southern Chinese city of Hong Kong, which borders Guangdong province, a government spokesman Sunday said the territory is closely monitoring the virus for any developments.