More than 60 dead as Iraqis mark end to lethal Ramadan 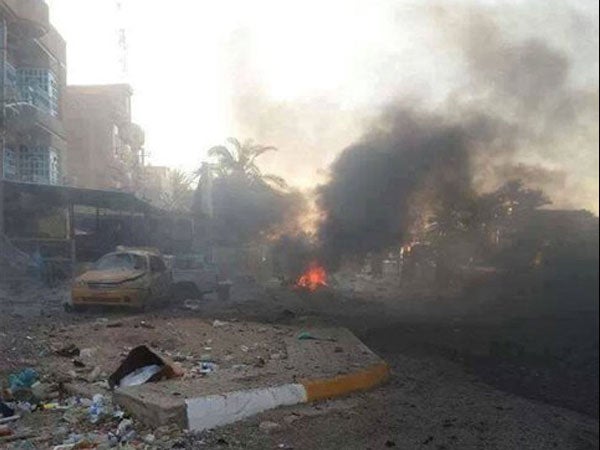 Smoke rises from the scene of a car bomb attack in Kadhimiya, Baghdad, Iraq, Saturday, Aug. 10, 2013. A wave of car bombings targeted cafes and markets around the Iraqi capital of Baghdad as people celebrate the end of the Muslim holy month of Ramadan, killing and wounding scores of people, officials said. AP

The attacks were the latest in spiralling violence which authorities have failed to stem, with the worst bloodshed in five years raising worries of a return to the all-out Sunni-Shiite

sectarian conflict that killed tens of thousands in past years.

The latest violence comes just weeks after brazen assaults, claimed by an Al-Qaeda front group, on prisons near Baghdad that freed hundreds of militants and which analysts warn could boost armed groups.

The United States condemned the perpetrators of Saturday’s attacks as “enemies of Islam and a shared enemy of the United States, Iraq, and the international community”, in an unusually detailed statement.

The State Department said the “cowardly” attacks had been “aimed at families celebrating the Eid al-Fitr” holiday that marks the end of the holy fasting month of Ramadan.

“He has taken personal credit for a series of terrorist attacks in Iraq since 2011, and most recently claimed credit for the operations against the Abu Ghraib prison outside Baghdad, the suicide bombing assault on the Ministry of Justice, among other attacks against Iraqi security forces and Iraqi citizens,” Psaki said.

“The United States has offered a $10 million reward for information that helps authorities kill or capture Abu Bakr al-Baghdadi. This reward is second only to information leading to Ayman al-Zawahiri, the chief of Al-Qaeda’s network,” she added.

The State Department response came after a week in which the United States had closed embassies and missions across the Arab world following intelligence reports of a possible Al-Qaeda strike.

Saturday’s violence followed major security operations against militants that officials hailed as having resulted in the killing and capture of many.

Overall, 16 car bombs and a series of shootings and other blasts killed at least 61 people and wounded nearly 300 across the country Saturday, security and medical officials said.

A spate of vehicles rigged with explosives were detonated in eight different neighborhoods of Baghdad, in apparently coordinated strikes.

The blasts hit public markets, cafes, and restaurants, killing 37 people overall, while violence earlier on Saturday killed two others in the capital, according to security and medical officials

At Baghdad’s Al-Kindi hospital, medics treated a man, apparently a soldier, whose face, chest and arms were covered in blood.

Outside, long lines of cars inched along Baghdad roads, held up by increased security measures that came too late for the dozens of victims.

Also on Saturday, a suicide bomber detonated an explosives-rigged vehicle near a police checkpoint in Tuz Khurmatu, north of the capital, killing nine people. A car bomb in Kirkuk, also north of Baghdad, killed an engineer.

Two car bombs in the southern city of Nasiriyah killed four, while a car bomb in the shrine city of Karbala left five others dead.

Elsewhere, three people were killed and five others wounded in separate attacks in Babil and Nineveh provinces.

More than 800 people died in attacks during the dawn-to-dusk fasting month of Ramadan, which began in the second week of July and ended this week.

Militants struck targets ranging from cafes where Iraqis gathered after breaking their daily fast, to mosques where extended evening prayers were held during the month.

The violence came just weeks after attacks on prisons near the capital in which hundreds of inmates were freed.

Analysts, as well as global police organisation Interpol, have warned that the jailbreaks could lead to a rise in attacks, as the escapees were said to include senior Al-Qaeda militants.

Security forces have meanwhile launched major operations, among the biggest since the December 2011 withdrawal of US forces, targeting militants in multiple provinces including Baghdad.

Violence has markedly increased this year, especially since an April 23 security operation at a Sunni Arab anti-government protest site that sparked clashes in which dozens died.

Protests erupted in Sunni-majority areas in late 2012, amid widespread discontent among Sunnis, who accuse the Shiite-led government of marginalizing and targeting them.

Analysts say Sunni anger is the main cause of the spike in violence this year.