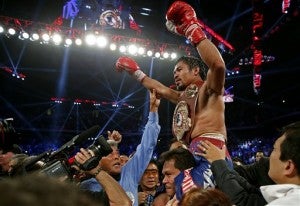 MANILA, Philippines — In coming to boxing superstar Manny Pacquiao’s defense, a colleague in the House of Representatives has proposed an unprecedented idea: Exempt him from paying income taxes for the rest of his life.

Valenzuela Rep. Magtanggol Gunigundo has filed a bill to save Pacquiao, who is also Sarangani representative, the trouble of paying income taxes for as long as he lives, for the outstanding honor and pride the “People’s Champ” has given to his countrymen.

The bill comes on the heels of another measure that seeks to exempt his winnings in the ring from being taxed.

Lawmakers are pushing the proposals as Pacquiao battles with the Bureau of Internal Revenue, which claims he has failed to declare his winnings in the United States.

Gunigundo said the lifetime tax exemption for Pacquiao, and for him alone, would be a fitting expression of the nation’s gratitude to the boxer for his achievements, and of its appreciation of the honor and inspiration he has brought to his countrymen.

In his explanatory note, Gunigundo praised Pacquiao’s sterling boxing record and “generosity and desire to help, even up to the use of his hard-earned money.”

He went on to sing praises for Pacquiao for being a “superhuman defined by a multitude of passions” and an “exemplar of humility.”

He noted that when Pacquiao was fighting, no crime occurred in the country during the hour of his boxing match. Pacquiao also praised his opponent at the end of his fights, and did not embarrass or belittle anyone, the Valenzuela lawmaker said.

Gunigundo also said Pacquiao’s humility, charisma and power have been the reasons why he has been well-loved, distinguishing him as a great champion.

“In the face of defeat, he exemplifies the Filipino spirit’s ability to function in the face of setbacks and you can see the discipline, perseverance and commitment that went into the hero’s success,” he added.

Even Pacquiao’s smile and physique were not spared from ringing endorsements.

“Paquiao’s impeccable footwork, speed and quick jabs have kept boxing fans on their feet. And his endearing smile, charm and chiseled physique have only helped to boost his public appeal,” Gunigundo said.

Gunigundo acknowledged that this would be the first time that the rare privilege of a lifetime income-tax exemption would be conferred on an individual in the country, but he noted that this had been done in Colombia, which granted a similar privilege to its citizen who won the Miss Universe crown in 1958.

The Colombian government also built the beauty queen, Luz Marina Zuluaga, a mansion. It even declared a national holiday in her name and printed postal stamps in her honor, the lawmaker noted.

He said Zuluaga won just once in an international beauty pageant and received so many accolades, while Pacquiao has done more.

“Manny Pacquiao has brought more countless honor and pride to the Filipino people,” he said.

Gunigundo’s bill also states that all the income tax payments Pacquiao made in the previous years would no longer be reimbursed to him.

But all other income tax liabilities for the previous years should be obliterated once the law takes effect, according to Gunigundo’s bill.