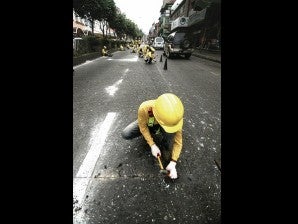 MMDA Chairman Francis Tolentino said that starting December 13, a moratorium would be implemented on all excavations or diggings in all national and city roads until midnight of January 6, 2014.

Starting on December 16 fun runs, walkathons, marathons, bike race, and other similar events will be banned until January 6, 2014.

It also said Christmas lanes covering 18 transit routes would be opened, but noted that details on this matter will be announced on Thursday.

Except this coming weekend, Tolentino also announced that there would be no more road re-blocking operations along major and secondary thoroughfares until January 6, 2014.

“These traffic measures are designed to facilitate the free flow of motorists and Christmas shoppers before the start of Simbang Gabi on December 16,” the MMDA chief said.

He added the MMDA is expecting a 20 percent increase in the traffic volume this Christmas season due to the influx of people and vehicles from Cavite, Laguna, Bulacan, and Central Luzon.