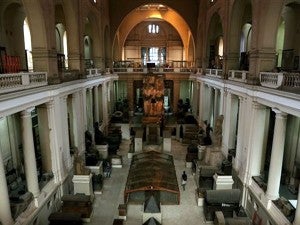 CAIRO, Egypt—The century-old home of Egypt’s mummies and King Tutankhamun’s treasures is trying to make the best out of the worst times of political turmoil. But the Egyptian Museum is taking a hammering on multiple levels, from riots on its doorstep to funding so meager it can’t keep up paper clip supplies for its staff.

The museum, a treasure trove of pharaonic antiquities, has long been one of the centerpieces of tourism in Egypt. But the constant instability since the 2011 uprising that toppled autocrat Hosni Mubarak has dried up tourism to the country, slashing a key source of revenue. Moreover, political backbiting and attempts to stop corruption have had a knock-on effect of bringing a de facto ban on sending antiquities on tours to museums abroad, cutting off what was once a major source of funding for the state.

The repeated eruption of protests in Cairo’s Tahrir Square, where the museum is located, has also scared away visitors. Over the summer there were the giant rallies that led to the July 3 military coup ousting Islamist President Mohammed Morsi. In recent weeks, protesters have returned to Tahrir, now venting their anger at the military-backed government that took its place.

“Tahrir Square is considered as the birthplace of the Egyptian revolution, and the museum is like a thermometer. It gets affected by the political situation at the square,” said Sayed Amer, the director of the Egyptian Museum, in a recent interview.

“Sometimes the square is closed but we keep the museum open,” he said.

On recent visits to the museum, there were only a handful of foreign visitors, and none at its most prized exhibits of mummies and King Tut’s treasures.

The museum is trying to make the most of the dry times. It has launched an extensive renovation for the palatial, 111-year-old salmon-colored building. The décor will get a makeover, and lighting and security systems will be upgraded in an overhaul, in cooperation with Germany, costing more than $4.3 million.

Plans are also being drawn up to demolish the neighboring former headquarters of Mubarak’s National Democratic Party, which was burned during the uprising, to create an open-air, Nile-side exhibition garden for the museum.

King Tut’s treasures will be moved to a new Grand Egyptian Museum under construction near the Giza pyramids, due to be finished in 2015. The plan reflects in part the embarrassment of riches Egypt enjoys in pharaonic artifacts, the Egyptian Museum in Tahrir is so overflowing with objects that more than half its collection sits in storage in its basement—in less than ideal conditions—meaning there’s plenty to draw visitors to both museums.

Amid the budget crunch, staffers are trying to find other sources of revenue.

Yasmin El-Shazly, the head of the Documentation Department that tracks the museum’s 200,000 items, set up a fundraising mechanism to bring in donations for the museum independently of the government.

Donations collected by the Friends of the Egyptian Museum group will help fund academic research in the museum, raise awareness of its projects and empower Egyptian experts and museum’s staff, who have gone without salaries for months.

“We don’t even have the money to buy office supplies like paper clips and pens, and pay for computer maintenance,” El-Shazly said. “It’s always been difficult because the money generated by the museum went to the government and rarely came back to us. But now, with no money coming from tourism, it’s worse than ever.”

Even more detrimental, few if any of Egypt’s precious antiquities are touring abroad.

A visit in October by a team of experts from the British Museum resulted only in words of hope for a renewed cooperation in the future and some training opportunities for Egyptian staff in London. Japanese exhibition organizers interested in a tour exhibit for objects from the King Tut collection left Egypt with no deal.

Such foreign tours were a lucrative revenue source, but virtually ground to a halt after Egypt’s chief archaeologist during Mubarak’s rule, Zahi Hawass, was forced to resign in 2011 on corruption allegations. Hawass denied the allegations, and he was not charged.

Last year, Morsi’s government cut short a Cleopatra-themed exhibit on tour in the United States after a Cairo court ruled that some of its pieces are too unique to allow out of the country and had to return immediately.

Antiquities officials are now reluctant to sign any deals with exhibitions abroad for fear of being accused of corruption—or worse, of being unpatriotic for sending away Egypt’s patrimony, amid the nationalist wave sweeping Egypt following the July coup.

The Cleopatra exhibit toured four cities in the United States, starting with Philadelphia’s Franklin Institute in June 2010. It included artifacts ranging from tiny gold coins to a pair of towering eight-ton granite figures, raised by French underwater archaeologist Franck Goddio from submerged ruins off the Mediterranean city of Alexandria.

Egypt was earning $450,000 dollars from each city the exhibit traveled to, plus $1 million for every 100,000 visitors and a 10 percent cut from merchandizing sales, Gazy said.

“It was a disaster for us,” Gazy said. No new contract has been signed since then.