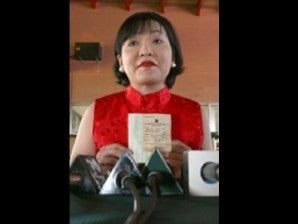 “I just signed the termination,” De Lima told the Senate finance committee deliberating on the proposed budget of the Department of Justice.

She said she signed the paper based on the assessment by the Intelligence Service of the Armed Forces of the Philippines that the threats to the life of Ong, had been reduced considerably.

“There’s no threat in the first place. Imagined threat,” said Senator Panfilo “Ping” Lacson, who first informed the committee that Ong had been removed from the witness protection program.

She accused Lacson of alleged drug trafficking, kidnapping for ransom, and summary executions at the onset of the Arroyo administration in 2001.